A robotic caterpillar has been designed which can crawl across the surface of the heart to deliver treatment. 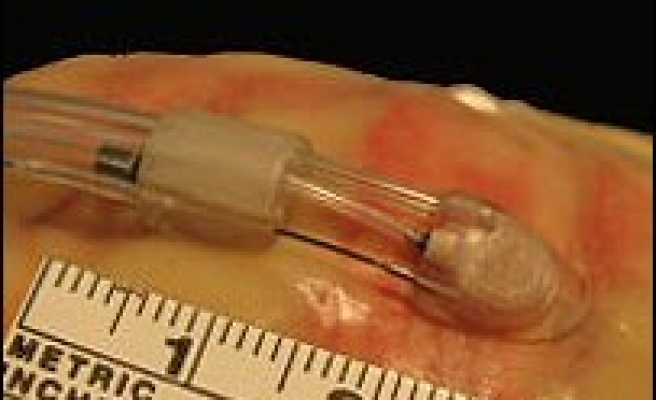 New Scientist reports a prototype of the HeartLander device, created by US researchers, has been tested on pigs.

The tiny robot, just a few centimetres long, can move at up to 18 centimetres per minute, controlled by "push and pull" wires from outside the body.

The British Heart Foundation said the "caterpillar" could one day be useful, but much more research was needed. The HeartLander has been designed by scientists at Carnegie Mellon University's Robotics Institute in Pittsburgh, Pennsylvania.

The study on pigs found it could fit pacemaker leads and inject dye into the animals' hearts.

It uses two sucker-like feet with which it can crawl across the heart.

It is inserted below the ribcage by keyhole surgery and is attached to the heart via a vacuum line to the suckers.

Dr Cameron Riviere, who led the research, says its use could allow procedures to be carried out without having to stop the heart, reducing the risk of illness linked to heart bypass procedures.

He added that not having to stop the heart, and being able to implant the device directly onto the heart rather than having to go past the lungs could benefit patients in other ways.

"It could mean a patient did not need general anaesthetic, and may be able to go home the same day."

The team also hope it will be possible to add a radio-frequency probe to the robot to treat faulty heart rhythms by killing damaged tissue.

Adding a camera to the device, rather than relying on the magnetic tracker on the skin which is currently being used, would help surgeons see specifically where the robot was on the heart's surface.

The HeartLander could be available for surgical use within three to four years, Dr Riviere said.

Professor Peter Weissberg, medical director of the British Heart Foundation said: "Whilst this is interesting, it remains to be seen whether it can deliver useful treatments for heart patients.

"This could theoretically be a vehicle for delivering cell therapies to damaged areas of the heart, so could ultimately be a useful tool, but at the moment we still don't know if such therapies work.

"A lot more research is needed to determine whether something delivered to the outside surface of the heart can modify activity on the inside - so this is interesting, but currently a long way from practical use in heart therapy."