Celebrities have their eyes on Parliament

Celebrities are preparing to run for the post of deputy in the general elections scheduled for July 22. Singer İbrahim Tatlıses is expected to run for Parliament as an independent candidate from Şanlıurfa. 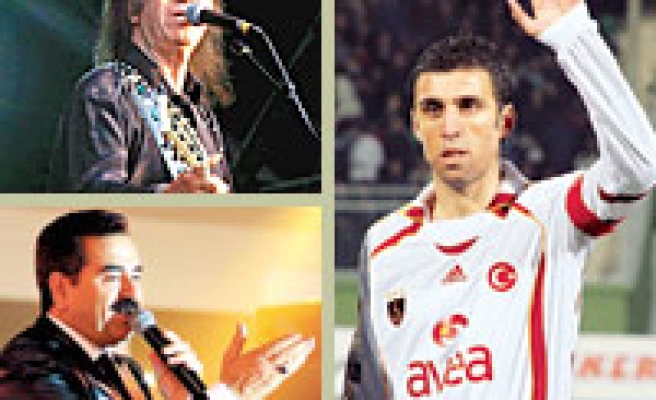 Celebrities are preparing to run for the post of deputy in the general elections scheduled for July 22. Singer İbrahim Tatlıses is expected to run for Parliament as an independent candidate from Şanlıurfa.

Other celebrities who are eager to involve themselves in politics include Hakan Şükür, the famous football player, who is most likely to choose the Justice and Development Party (AK Party); Şahnaz Çakıralp, a model, who is likely to select the Republican People's Party (CHP); Erkin Koray, a rocker, and Cengiz Kurtoğlu, a tavern singer, who will opt for the Nationalist Movement Party (MHP).

When asked about a report that "Hakan Şükür is warming up for politics," State Minister Mehmet Ali Şahin said: "If Şükür engages in politics, I would be pleased if he prefers our party. I am even ready to leave my place for him."Whether Şükür, who has close ties with Prime Minister Recep Tayyip Erdoğan, will choose the AK Party will be known at the end of Turkey's Turkcell Super League.

The merger of the DYP and the Motherland Party (ANAVATAN) will be accompanied by many celebrities heading for politics. After these parties unite under the Democrat Party (DP) umbrella, if the DP manages to pass the election threshold, many celebrities and experienced politicians are expected to enter Parliament. Well-known politicians include Mehmet Ali Bayar and former Gaziantep Mayor Celal Doğan, while Şebnem Kısaparmak or her husband, Fatih Kısaparmak, who previously became members of the DYP, will enter Parliament as part of the quota allocated to their fellow townsman, Mehmet Ağar.

Hikmet Çetin, a former speaker of parliament who has been trying to set up a political party of his own, was forced to abandon this effort after snap election decisions made by Parliament. Instead, he may opt to align himself with the DP for the elections, political analysts say. Mehmet Gül, who was a prominent figure in the MHP and who was former İstanbul deputy, may be nominated from İstanbul by the DYP and ANAVATAN alliance for Parliament.

Baykal is creating a new image

In the tradition of previous parliamentary elections, CHP leader Deniz Baykal has started to create a new party image for the current elections. For the 2002 elections, Baykal's A-team consisted of Zülfü Livaneli, Berhan Şimşek, Yaşar Nuri Öztürk, Kemal Derviş and Akif Hamza Çebi. It took four-and-a-half years to weaken this team, whose main platform was "Anatolian left." Now, Baykal will try to appeal pro-republic and secularist figures for the nearing elections. Şahnaz Çakıralp, an actress and a member of the party's executive board, is expected to run for Parliament this time. Also, Hüsamettin Özkan, who is currently holding talks with CHP İstanbul deputy Mehmet Sevigen, may be nominated for Parliament from the CHP.

The MHP has offered to nominate for Parliament Cengiz Kurtoğlu, a famous tavern music singer, and Erkin Koray, known as the founding father of Turkish rock music. Also, Deniz Bölükbaşı, who conducted negotiations between the US and Turkey concerning parliamentary permission for passage of US soldiers to Iraq, will be on the MHP's list. Kemal Çevik, an economy bureaucrat, and Füsun Koroğlu, who had served as the undersecretary of former Prime Minister Bülent Ecevit, also figure prominently.