President Hugo Chavez said Saturday that Venezuela is ready to become the sole energy supplier to Cuba, Bolivia, Nicaragua and Haiti, presenting the countries with his most generous offer yet of oil-funded diplomacy in the region. 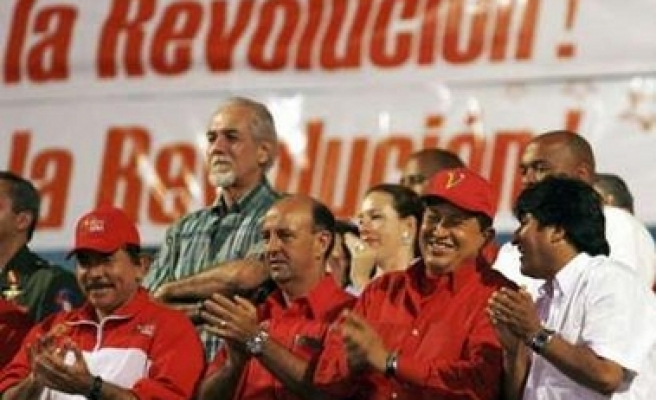 President Hugo Chavez said Saturday that Venezuela is ready to become the sole energy supplier to Cuba, Bolivia, Nicaragua and Haiti, presenting the countries with his most generous offer yet of oil-funded diplomacy in the region.

Chavez said he hoped to sign a deal with the four countries, his main leftist allies in the region, during the summit of The Bolivarian Alternative for the Americas he is hosting this weekend in Caracas.

The bloc, known as ALBA, was formed in 2004 by Chavez and Cuban Fidel Castro to promote trade and cooperation along socialist lines and to oppose a U.S.-backed free trade area. It has since grown to include Bolivia and Nicaragua. Ecuador has also expressed interest and Haiti was attending the two-day summit that started Saturday as an observer.

"The time has come for this oil, this energy, these resources to in some way serve the development and happiness of our people and the union of our territories," said Chavez, whose nation is a major oil exporter with vast reserves.

"I've come here to propose to the member countries of ALBA — and in that we are already including Haiti — that Venezuela guarantee ... the supply of all your energy needs," said Chavez. "100 percent."

Under the proposal, Venezuela was ready to finance up to 50 percent of the total oil bill and would also create a matching fund to finance agricultural projects, food production and small-to-medium size industries, Chavez said.

It was not immediately clear if Venezuela was in a position to follow through on its pledge. Venezuela sends most of its oil exports to the United States, where it receives top dollar, and diverting them elsewhere would come at a cost. Furthermore, there are few refineries outside of the U.S. capable of processing Venezuela's heavy crude into usable products.

Chavez promised that further details would be forthcoming, but said the ALBA proposal would be more generous than a previous accord with 14 Caribbean nations that accepts partial payment for oil in goods like bananas and nutmeg.

The ALBA alliance has evolved into a symbol of Chavez's petrodollar-based clout in the region, bringing millions of dollars in aid to its members to vie with U.S. interests.

Since signing on last April, Bolivia has won promises for at least $150 million in donations and loans for rural radio stations, fuel shipments and other projects, according to a tally by The Associated Press.

Nicaragua joined in January and was rewarded with pledges for $60 million in financing.

The total aid figure for Cuba is unknown, but Venezuela at present sends about 98,000 barrels a day of oil to Cuba in return for agricultural goods and the services of some 20,000 Cuban doctors. Under ALBA, that program has been extended to Bolivia.