Chavez meets king of Spain after 'shut up' incident

Relations deteriorated between the two countries last year after the king shouted at Chavez: "Why don't you shut up?". 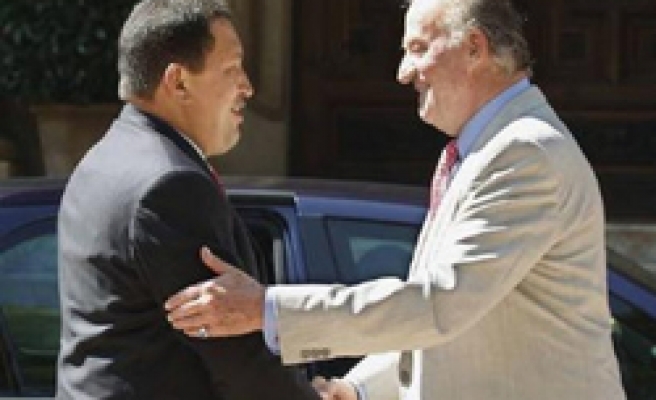 Venezuelan President Hugo Chavez and Spain's King Juan Carlos shook hands and made up on Friday in their first meeting since the monarch told the president to "shut up" at a summit in November.

A relaxed Chavez joked "Why don't we go to the beach?" as he met the smiling king in sunshine outside the royals' summer residence on the island of Majorca.

However, the outspoken Venezuelan leader, dressed in a dark suit and tie, fell short of giving the monarch a hug, as he said he would like to do last Sunday on his weekly television show.

Relations deteriorated between the two countries last year after the king shouted at Chavez: "Why don't you shut up?", when Chavez interrupted a speech by Spanish Prime Minister Jose Luis Rodriguez Zapatero at the Ibero-American summit in Chile.

Footage of the outburst was beamed around the world, inspiring mobile phone ringtones, mugs and T-shirts.

The king lost his temper after Chavez called former Spanish Prime Minister Jose Maria Aznar -- of the conservative PP party -- a fascist, prompting Socialist Zapatero to ask for respect for an elected representative of the Spanish people. Minutes after the incident a grim-faced king rose from his seat and stormed out of the forum.

Chavez later threatened to review diplomatic and business ties with former colonial power Spain, a major investor in the region, and demanded a public apology from the king.

However, relations have since thawed, with Chavez sending his regards to the king during a meeting with Zapatero at a summit in Peru in May. Chavez will travel to Madrid later on Friday for a short meeting and lunch with Zapatero as part of a European tour which has passed through Russia, Belarus and Portugal.

Venezuela said the visit was a mark of the strong ties between the two countries and an occasion to reinforce bilateral relations.