The Venezuelan president is visiting Russia, apparently shopping for hardware to boost its military against the US. 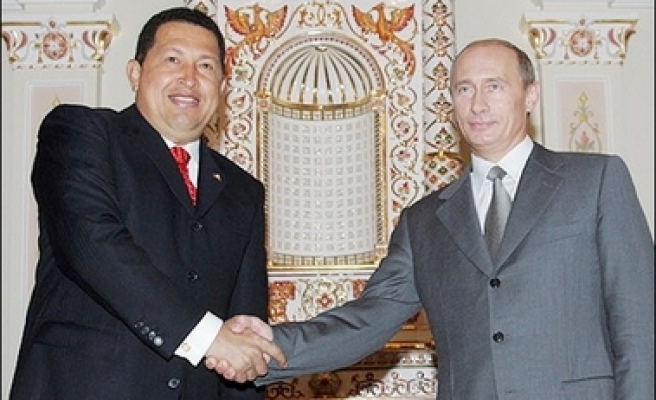 The Venezuelan president is visiting Russia, apparently shopping for hardware to boost its military against the US.

Last July, Chavez spent billions of dollars on Russian helicopters, arms and fighter jets. This time he is thought to be shopping for submarines.

"So I came to Moscow to talk to Vladimir and after four months we had Sukhoi planes flying over Caracas. And now we have our first fleet of aircraft.

Russian newspaper Kommersant reported this month that Chavez was expected to sign an initial contract that would include five Project 636 Kilo-class diesel submarines, and possibly four other submarines later, although the Venezuelan defence minister denied it.

Caracas already has purchased about $3 bn worth of arms from Russia, including 53 military helicopters, 100,000 Kalashnikov rifles, 24 SU-30 Sukhoi fighter jets and other weapons.

The strengthening relationship between Russia and Venezuela has clear mutual benefits.

Besides lucrative trade ties and co-operation in the energy sector, they are also sending out a signal that "the American imperialists should understand that they cannot control the whole world", according to Chavez.

Russia is not the only stop on his itinerary. He goes on to Belarus hoping to buy an air defence system, and then to Iran for talks on energy and nuclear issues, calling on, and doing business with, governments that Washington has serious concerns about.

Russia's hand in helping build up one of Washington's most vocal critic in Latin America will not help smoothen an already delicate meeting set to take place between Putin and his American counterpart George Bush at the Bush family compound in Kennebunkport, Maine, on Sunday and Monday.
Last Mod: 29 Haziran 2007, 12:54
Add Comment