Venezuelan President Hugo Chavez says he plans to nationalize private banks if they do not give priority to financing the developement of the country. 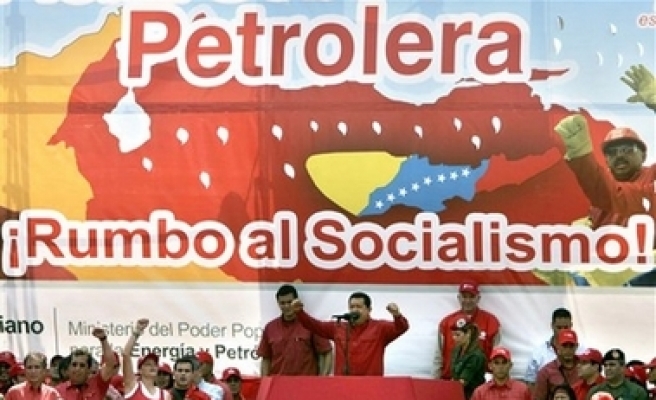 "Private banks have to give priority to financing the industrial sectors of Venezuela at low cost," Chavez said. "If banks don't agree with this, it's better that they go, that they turn over the banks to me, that we nationalize them and get all the banks to work for the development of the country and not to speculate and produce huge profits."

It was not clear if Chavez was only referring to Venezuelan banks like Mercantil Servicios Financieros CA and others, or if he was aiming the threat at major international banks that do business in the country, such as Banco Santander Central Hispano SA and Citigroup Inc.

Chavez also warned the government could take over steel producer Sidor, which is majority controlled by Luxembourg-based Ternium SA.

Sidor "has created a monopoly" and sold the bulk of its production overseas, forcing local producers to import tubes and other products from China and elsewhere, Chavez said.

"If the company Sidor ... does not immediately agree to change this process, they will oblige me to nationalize it," Chavez said.

"I prefer not to," Chavez added, as he ordered Mining Minister Jose Khan to depart immediately for the company's headquarters and return with a recommendation within 24 hours.

"Sidor has to produce and give priority to our national industries ... and at low cost," he said.

It also took control of Venezuela's most promising oil fields and refineries from foreign oil companies processing crude in the Orinoco River basin on Tuesday.