U.S. Vice President Dick Cheney said on Monday he did not believe Palestinian President Mahmoud Abbas would agree to reconcile with Hamas until the Islamist group gave up control of the Gaza Strip. 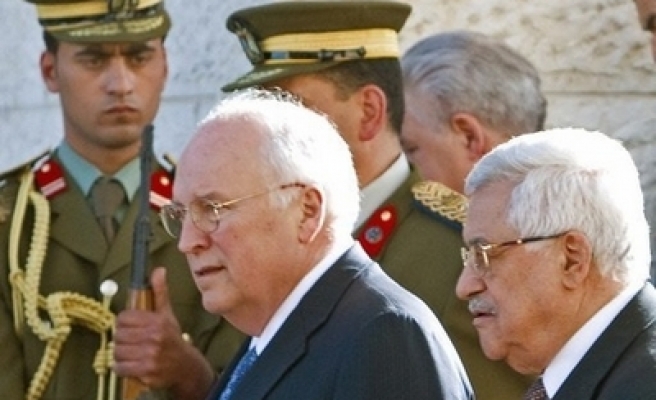 He was speaking to reporters in Jerusalem, a day after representatives of Abbas's Fatah faction and Hamas issued a declaration in Sanaa agreeing to resume dialogue under a Yemeni fence-mending initiative.

"My conclusion from talking with the Palestinian leadership is that they have established preconditions which would have to be fulfilled before they would ever agree to a reconciliation, including a complete reversal of the Hamas takeover of Gaza," Cheney said.

Cheney, on a three-day visit to Israel and the Palestinian territories, met Abbas in the occupied West Bank on Monday shortly after the declaration was issued in the Yemeni capital.

The Yemeni initiative calls for the "Palestinian situation" to return to the way it was before June, when Hamas Islamists took control of the territory of 1.5 million people from secular Fatah in fighting in June.

The West Bank-based Palestinian leadership made clear in a statement after the Sanaa declaration was issued that it continued to demand, as part of any renewed dialogue with Hamas, that its rival give up control of the Gaza Strip.

Hamas rejected that position, saying articles of the Yemeni plan were up for negotiation.

After meeting Cheney, Abbas said Israeli settlement expansion, roadblocks in the West Bank and raids against fighters were holding up progress in peace talks relaunched at a U.S.-led conference in Annapolis, Maryland last November.

A senior Israeli Defence Ministry strategist cliamed it was unlikely Abbas would patch up ties with Hamas, as long as the Fatah leader believed peace with Israel remained an option.

He said Hamas and Fatah had agreed in Sanaa to reconvene in April only "out of respect for Yemeni President Ali Abdullah Saleh", but no deal was possible because Fatah would never recognise Hamas control of the Gaza Strip.