Vice President Cheney threantened to Iran while aboard an aircraft carrier in the Persian Gulf, saying the USA would join allies to keep Iran from getting nuclear weapons "and dominating the region." 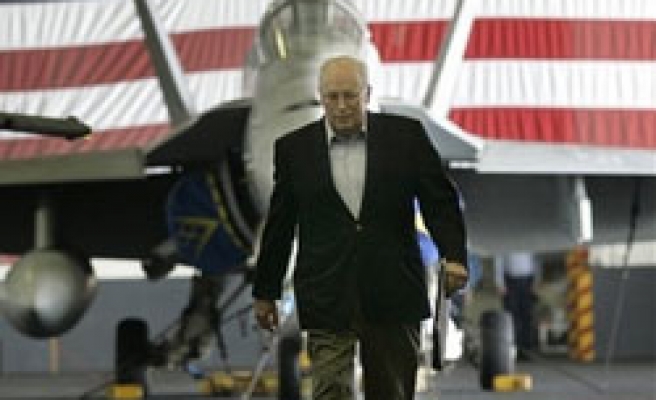 Vice President Dick Cheney threantened to Iran while aboard an aircraft carrier in the Persian Gulf on Friday, saying the United States would join allies to keep Iran from getting nuclear weapons "and dominating the region."

Iran exerts considerable control over the narrow passageway that separates the Persian Gulf from the open waters of the Arabian Sea. Roughly a quarter of the world's oil supplies pass through the Straits of Hormuz.

Iran loomed about 150 miles to the east as Cheney spoke aboard the USS John C. Stennis. The carrier was steaming about 20 miles off Abu Dhabi in the United Arab Emirates. Cheney is spending time there after a two-day tour of
Iraq.

It was the latest shot in an escalating war of words, with both Tehran and Washington seeking to increase influence over states bordering Iraq. Cheney's visit comes just two days before Iranian President Mahmoud Ahmadinejad was to visit Abu Dhabi.

"We'll stand with others to prevent Iran from gaining nuclear weapons and dominating this region," said Cheney.

Cheney visits Saudi Arabia on Saturday as part of his tour of Arab states, seeking help in stabilizing Iraq. He also will visit Egypt and Jordan.

It was a repeat visit for Cheney, who came to the carrier in March 2002 as he was trying to build support in the area for invading Iraq.

Standing in front of five F18 Super Hornet fighters and a huge American flag in the cavernous hangar deck — one flight below the carrier's flight deck — Cheney sounded a hard line both on holding firm in Iraq and confronting Iran if necessary.

Little more than four years after President Bush stood on another aircraft carrier beneath a "Mission Accomplished" banner and declared an end to major combat, Cheney gave a far more measured description of progress in Iraq.

"We want to complete the "mission", get it done right, and return with honor," he told Stennis crew members.