Fears of a virus that has killed at least 26 children in China gripped parents in Beijing on Tuesday amid a spreading outbreak of hand, foot and mouth disease. 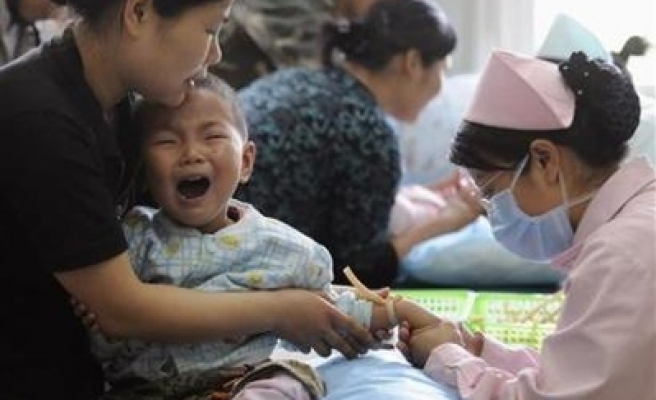 The health scare prompted the Foreign Ministry to seek to assure the country it was doing its best to contain the outbreak.

"The Chinese government is paying great attention to the virus and related departments are taking effective measures to stop it from spreading," ministry spokesman Qin Gang told a news conference.

Hand, foot and mouth is a common illness in children and infants caused by a family of viruses called enteroviruses and outbreaks regularly occur in China.

But the current outbreak has led to fatalities mostly when linked with enterovirus 71 (EV71), which can cause a severe form of the disease that can lead to high fever, paralysis and viral meningitis.

Some 11,905 cases of hand, foot and mouth have been reported in China this year, the official Xinhua news agency said. EV71 has caused 26 deaths, largely in Fuyang, a city in China's eastern province of Anhui. At least two deaths were in the southern province of Guangdong.

All of the deaths in Fuyang were of children under six years old and most were under two.

Parents in Beijing, host city of the 2008 Olympics that has not reported any deaths from EV71, were also on the alert.

"Of course we're worried. If a child got sick, we'd be very frightened," said one woman, bouncing a toddler on her hip. "We know about this virus, but we don't know clearly how to protect ourselves. The information hasn't been thorough enough."

Beijing has had 1,482 cases of hand, foot and mouth disease this year, mostly in children under five, the Beijing News reported.

It was not immediately clear whether any of the Beijing cases involved the EV71 strain, but Beijing said it would from now on release a weekly toll to the media.

The city's Centre for Disease Control has advised that any child found with the illness should be isolated at home, and that if more than three children in a single classroom were infected the class should be suspended, the newspaper said.

A doctor from a Beijing children's hospital declined permission for interviews there, saying it could cause panic.

"Parents are already very nervous, and if they see a camera, they would think that our hospital has such cases and they will take away their children," the doctor told Reuters.

The World Health Organisation this week ruled out the virus as a threat to the Olympics but has cautioned that the virus, which spreads mostly through contact with infected blisters or faeces, could be yet to peak.

China, which initially covered up the SARS epidemic in 2003, has denied a cover-up this time round and ordered authorities to aggressively tackle hand, foot and mouth.

An editorial in Monday's China Daily blamed the crisis in Fuyang on a "delayed reaction" by the local government.

But at least one Beijing resident said he had confidence in the government's efforts.

"Before, when SARS hit, that was the scariest time," said He Xinping, the father of an 8-year-old. "But now, with Beijing hosting the Olympics, the city is certain to increase its efforts."