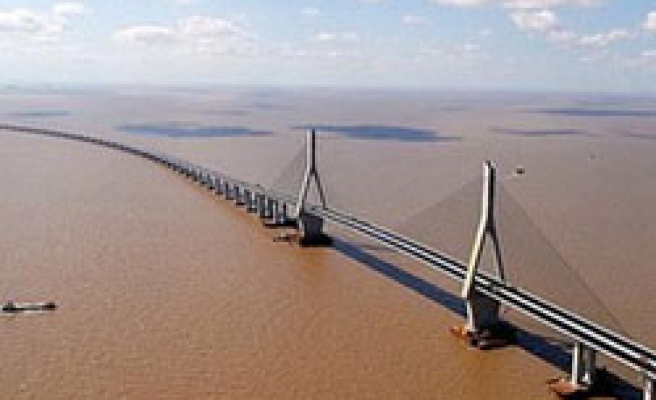 Costing about $1.5 billion, the Hangzhou Bay Bridge dwarfs other bridges across seawater, such as the 25-km causeway connecting Bahrain to Saudi Arabia. It is long enough to link Britain and France across the English Channel.

Built to withstand typhoons that hit the eastern Chinese seabord near Shanghai, as well as shifting soil conditions, the concrete-and-steel bridge took three years to complete and was one of China's most challenging construction projects.

Firecrackers and traditional dancers greeted over a thousand guests at a ceremony in the middle of the bridge as engineers finished work on the final construction block.

With three lanes in each direction and a rest and refuelling area at its middle, the bridge links Cixi City in Zhejiang province with Jiaxing City to the north, shortening the journey between Shanghai and the major port of Ningbo by 120 km.

Officials aim to open the bridge to traffic in June 2008 after support facilities such as toll gates and feeder roads are completed.

The official Xinhua news agency said private firms provided about 29 percent of the bridge's cost, making it one of China's first big infrastructure projects to involve major private participation. Costs will be recouped through a toll system.