Uighur Muslims complain of closure of mosques and schools by Chinese authorities. 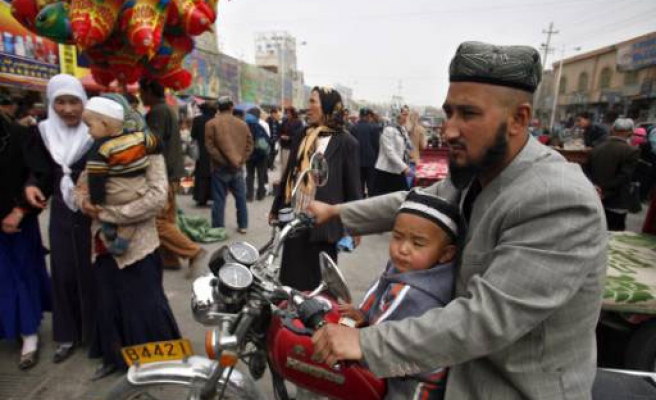 In a show of piety rare in atheist China, thousands of Muslims gathered for the weekly prayers southern Dogu Turkistan on Friday, April 4, complaining of lack of freedom of worship.
"We don't have the freedom to worship as we wish," a 17-year-old Muslim worshipper told media as he performed the weekly prayers.

The worshippers filled the main mosque in the Silk Road town of Yarkand and overflowed into its surrounding square, kneeling for prayers.

China's constitution upholds religious freedom, but in reality all religion must be practiced under the eye of the ruling Communist Party.

"There are things that we're not satisfied with here," said the Muslim youth.

Muslim in Dogu Turkistan complain of the closure of mosques and schools by Chinese authorities on grounds of having no required license to run.

Beijing views Dogu Turkistan as an invaluable asset because of its crucial strategic location near Central Asia and its large oil and gas reserves.

Dogu Turkistan by Chinese name Xinjiang has been autonomous since 1955 but continues to be the subject of crackdowns by Chinese authorities.

Rights groups accuse Chinese authorities of religious repression against Uighur Muslims, a Turkish-speaking minority of eight million, in Dogu Turkistan in the name of counter terrorism.

Many Uighurs complain that the Chinese crackdown is widening the gap between them and the local Chinese.

"Many Chinese don't like Uighurs and many Uighurs don't like Chinese," Aysha, a local English-speaking Uighur tour guide, told media.

"Very few here like the Chinese government. But what can we do?" added Habedi, the cab driver.

The official oppression of the Uighur minority usually goes unnoticed due to the strict media blackout.

"There is violence, here and there, sometimes. But you people will not hear about it, will you?" asked a Muslim carpet merchant, who gave his name as Musa.

"It seems it's all a secret," Meteiba told media.

"They said on television that something happened, but they didn't say clearly what it was. They just said it was a problem between ethnic groups."

Last month, Chinese officials claimed that an alleged plot to attack the Olympics was foiled in Dogu Turkistan.

They also said a flight from the regional capital of Urumqi narrowly escaped a hijacking attempt.

But experts and rights activists said that the Chinese announcement seemed rather exaggerated and only a pretext for more crackdowns against the Muslim-populated Dogu Turkistan region.