China's former top drug regulator was sentenced to death Tuesday in an unusually harsh punishment for taking bribes to approve substandard medicines, including an antibiotic blamed for at least 10 deaths. 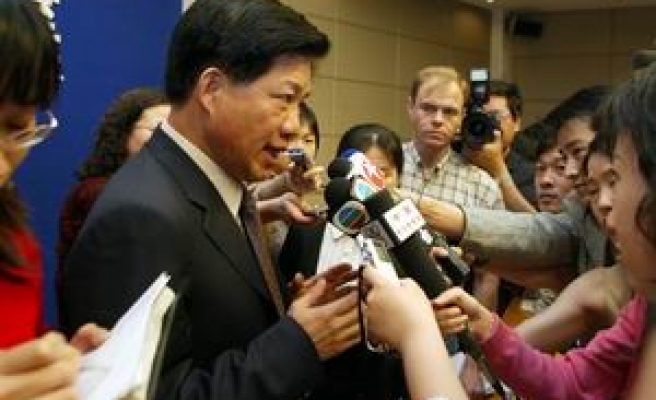 China's former top drug regulator was sentenced to death Tuesday in an unusually harsh punishment for taking bribes to approve substandard medicines, including an antibiotic blamed for at least 10 deaths.

Seeking to address broadening concerns over food, the government also announced plans for its first recall system for unsafe products.

The developments are among the most dramatic steps Beijing has taken to address domestic and international alarm over shoddy and unsafe Chinese goods — from pet food ingredients and toothpaste mixed with induso trial chemicals to tainted antibiotics.

Beijing's No. 1 Intermediate People's Court convicted Zheng Xiaoyu of taking bribes in cash and gifts worth more than $832,000 while he was director of the State Food and Drug Administration, the official Xinhua News Agency said. Those bribes allowed eight companies to get around drug approval standards, it said.

Zheng also failed to make "careful arrangements for the supervision of medicine production, which is of critical importance to people's lives," Xinhua said, citing the court. Under his watch, six types of medicine approved were fake and pharmaceutical companies got away with using false documents to apply for approvals, it said. No other details were given.

The punishment was appropriate given the "huge amount of bribes involved and the great damage inflicted on the country and the public," Xinhua said.

In one instance, an antibiotic approved by Zheng's agency killed at least 10 patients last year before it was taken off the market.

It was not immediately clear if Zheng would appeal. Under Chinese law, a death sentence meted out by an intermediate court automatically will be reviewed by a higher court and ultimately has to be approved by the state supreme court.

The sentence was unusually heavy even for China, which is believed to carry out more court-ordered executions than all other nations combined — and likely indicates the leadership's determination to deal with the recent scares involving unsafe food and drugs.

Zheng's sentence was unusually harsh given his rank, though the Communist Party has in recent years pressed an anti-corruption campaign with renewed vigor. The last time someone of Zheng's rank was executed was in December 2003, when Wang Huaizhong, the deputy governor of central Anhui province, was put to death for corruption.

"The Chinese government attaches great importance to the safety and security of food," Foreign Ministry spokeswoman Jiang Yu said at a regular briefing Tuesday when asked about Zheng's case.

"We stand ready to work with the international community to safeguard the quality and reputation of the Chinese food industry," she said.

In its noon newscast, state television showed a gray-haired Zheng, 62, flanked by court police, who handcuffed him while the verdict was being read.

Zheng had 23 years of experience manufacturing pharmaceuticals in the eastern city of Hangzhou before being appointed the drug administration's first head in 1998, China Central Television said in its report. He ran it until he was fired in 2005.

Zheng saw his power increase substantially in 2002 when the government required that all drugs be approved by the agency. The change resulted in a massive backlog, a situation that encouraged corruption and corner-cutting on approvals for often bogus or dangerous drugs.

Meanwhile, China's first food recall measures will be implemented by the end of the year, an official from the General Administration of Quality Supervision, Inspection and Quarantine, China's main food safety agency, was cited as saying.

"All domestic and foreign food producers and distributors will be obliged to follow the system," Wu Jianping, director general of the administration's food production and supervision department, was quoted as saying by the state-run China Daily newspaper.

The recall system will be put in place gradually and will focus on "potentially dangerous and unapproved food products," the report said.

The report did not provide further details and the inspection agency refused to comment.

Current regulations on product inspection, issued in 2002, mention the need for a food recall system but the issue has never been systematically addressed, the China Daily said.

The China Daily also said the State Food and Drug Administration, the agency formerly run by the disgraced Zheng, will blacklist food producers who break rules.

Under a nationwide safety campaign launched Monday, 90 administration inspectors will be sent to 15 provinces over the next two weeks, the newspaper said.

Food safety problem is a serious problem across the vast country, with China's Health Ministry reporting almost 34,000 food-related illnesses in 2005. Spoiled food accounting for the largest number, followed by poisonous plants or animals and use of agricultural chemicals.

According to the official magazine Outlook Weekly, a survey by the quality inspection administration found that a third of China's 450,000 food makers had no licenses. Also, 60 percent of the total did not conduct safety tests or have the capability to do so, the survey found.