The flights represent the first of a step-by-step approach to improve ties but trickier issues remain, such as a peace treaty and the hundreds of missiles Taiwan says China has aimed at the island. 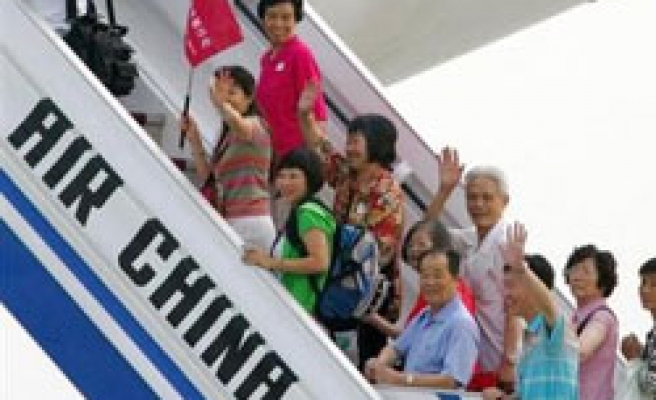 Historic regular flights between Taiwan and China began on Friday, in a show of conciliation between the long-time rivals that could bring large numbers of mainland Chinese visitors to the island.

The first of the flights, a China Southern Airlines plane, landed at Taipei's Taoyuan airport after leaving Guangzhou in southern China early in the morning.

It was followed a short time later by a flight from the southern city of Xiamen that arrived at Taipei's Songshan city airport. Flights from China will be leaving from a number of cities, including Shanghai.

No such regular flights, aside from a few charters on select holidays, have flown since 1949, when defeated Nationalist forces fled to Taiwan after the Chinese civil war.

The flights are largely the work of new Taiwan President Ma Ying-jeou, who took office in May on pledges to revitalize the island's economy with closer trade and transit ties to China. He has estimated that 50 million Chinese want to visit Taiwan.

Since Ma took office, his government has introduced a raft of other reforms as well, many designed to make it easier for Taiwanese to invest in China's financial and other markets.

The recent cross-Strait detente contrasts sharply with the tension of only 11 years ago when missiles were splashing into the Taiwan Strait.

The flights represent the first of a step-by-step approach to improve ties but trickier issues remain, such as a peace treaty and the hundreds of missiles Taiwan says China has aimed at the island.

China claims sovereignty over self-ruled Taiwan and has vowed to bring the island under its rule.

For the moment, though, both sides are keen to capitalize on the goodwill generated by the flights.

At Taipei's Songshan airport, passengers on the first flight were greeted by a throng of local media, along with a welcoming ceremony complete with dragon dancers.

"It's so convenient to get here. Since I was very young I always wanted to go to Alishan," said Wang Qi, a 40-year-old Chinese tourist on the Xiamen flight, referring to Taiwan's most famous mountain. "So today I feel very happy and warm."

Wang was one of 109 tourists, all wearing pink T-shirts, who came on the first flight to Taipei for a 10-day stay.

The flights were not without some controversy, as a group of about a dozen Tibet independence activists shouting "Welcome to free Taiwan" protested outside the airport over Beijing's recent crackdown in Tibetan regions of China.

Representatives of the Fulun Gong spiritual movement, banned by China as a cult, were also expected to organize demonstrations outside famous tourist spots for mainland tourists.

Enthusiasm about an expected boom in cross-Strait tourism helped to push up the tourism index by nearly 3 percent in early Friday trade in Taiwan, even as the broader market fell.

Negotiators from China and Taiwan agreed last month to the Friday to Monday "weekend" flights. They also decided to let as many as 3,000 Chinese tourists a day visit the island, which has viewed them as a security risk but now wants their money.

The 36 round trips per week will eliminate time-consuming Hong Kong or Macau stopovers for Taiwanese, about 1 million of whom live on the mainland. But they will still fly a roundabout route through Hong Kong air space for security reasons.

The flights are expected to hurt Hong Kong's airlines, most notably Cathay Pacific, and to help Taiwan's China Airlines and China's China Eastern, though the shift in travel patterns should be gradual.

In Beijing, tourism and government officials gave speeches before the departure of an Air China flight with 294 passengers bound for Taiwan.

"Today is a new start in the history of exchanges between the two sides," said Wang Yi, director of China's Taiwan Affairs Office, which oversees Taiwan relations. "At present, cross-Strait relations are facing a rare opportunity for development," he said

Twelve airlines, eight Taiwan airports and numerous travel agents have scrambled over the past month to prepare for Friday's flights, which ply between Taiwan and the Chinese cities of Beijing, Guangzhou, Nanjing, Shanghai and Xiamen.