Climate change experts have begun a meeting in Bangkok with calls for urgent action to slow global warming and calls from China not to overlook the interests of the developing world. 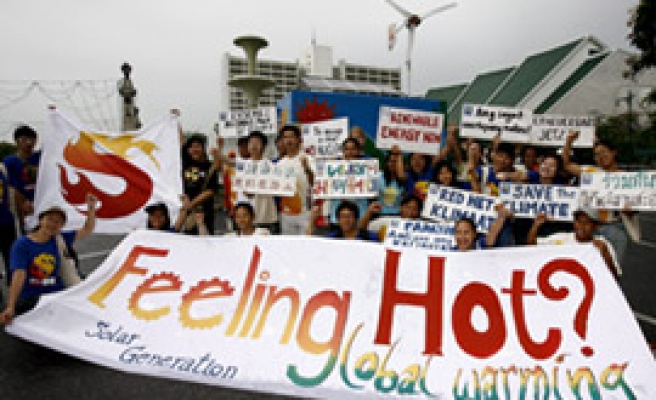 Climate change experts have begun a meeting in Bangkok with calls for urgent action to slow global warming and calls from China not to overlook the interests of the developing world.

The week-long meeting of some 400 scientists is intended to address what action the world's governments can best take to avoid the consequences of global warming.

The gathering is the latest stage of the United Nations' Intergovernmental Panel on Climate Change (IPCC).

Among the top concerns are the effects of China's surging growth, with reports saying it could overtake the US as the world's top producer of greenhouse gases as early as this year.

Ahead of the meeting a Chinese delegate said that while Beijing was fully committed to tackling climate change, it hoped that the interests of poorer countries would be recognised.

Greenpeace protesters take their message outside their conference venue [EPA] China has rejected any internationally binding caps on its emissions, saying the developed world is the major cause of the problem and that developing countries should be allowed to pursue similar economic growth models.

"That will be a very big challenge for the Chinese government to realise that objective.

If that objective is realised, that is a great contribution that the Chinese government will make to climate change."

The Bangkok meeting will finalise a report, due to be released on Friday, expected to lay out how the world can mitigate rising levels of carbon dioxide, methane and other heat-trapping gases.

The report follows two others from the IPCC this year painting a dire picture for the future of the planet in which unabated greenhouse gas emissions could drive global temperatures up as much as 6 degrees Celsius.

A draft version of Friday's third report, which will be amended following comments from dozens of governments, says emissions can be cut below current levels if the world shifts away from carbon-heavy fuels like coal, invests in energy efficiency and reforms the agriculture sector.

It says the world must quickly embrace a basket of technological options - already available and being developed - just to keep the temperature rise to 2 degrees Celsius.

Making buildings more energy-efficient, especially in the developing world, through better insulation, lighting and other steps, could also lead to significant cuts as would converting from coal to natural gas, nuclear power and renewable energy such as wind.

"The science certainly provides a lot of compelling reasons for action," said Rajendrat Pachauri, chairman of the IPCC.