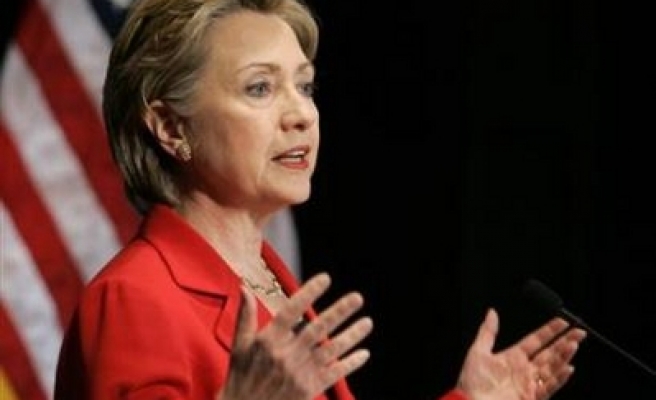 A Gallup tracking survey indicated the Illinois senator extending his lead over Clinton among Democrats nationally to 52 percent versus 42 percent, Obama's largest lead of the year so far.

This marks the first time either candidate has held a double-digit lead over the other since early February, when Clinton led Obama by 11 percentage points, the polling firm pointed out.

On Sunday, the New York senator vowed to stay in the White House race to the bitter end as party elders floated ideas to avert a paralyzing struggle between her and Barack Obama.

In a Washington Post interview, the former first lady said: "I know there are some people who want to shut this down and I think they are wrong.

"I have no intention of stopping until we finish what we started and until we see what happens in the next 10 contests, and until we resolve Florida and Michigan."

The two states were stripped of their delegates to the Democrats' August convention when they advanced their primaries into January. Clinton won both contests and needs the results to stand to have any chance of overhauling Obama's lead in the national popular vote.

The Clinton-backing chief executive of Pennsylvania, which is the next state to vote on April 22, said it was a "disgrace" that Obama's campaign was pressing for him to become the nominee with weeks of voting to go.

But Governor Edward Rendell, speaking on ABC television, also said he would "love" for the two star Democrats to join forces against Republican candidate John McCain for November's general election.

Clinton, who is behind Obama in terms of elected delegates and states won, is under mounting pressure to bow out of the nominating race so that the Democrats can take the fight to McCain.

Obama however on Saturday said "Senator Clinton can run as long as she wants."

Former president Bill Clinton said his wife could still win the Democratic race and insisted that party unity would prevail.

Meanwhile, former Vice President Al Gore, one of the party's most senior statesmen said Sunday that he was steering clear of the nomination fight for now.

"I'm trying to stay out of it," Gore told CBS television's "60 Minutes" news broadcast, even as fears continued to mount that the bitter nomination fight between Hillary Clinton and Barack Obama threatens to tear the Democratic Party apart.

Tennessee's Democratic governor, Phil Bredesen, meanwhile returned to his idea of a gathering in mid-June of the nearly 800 party luminaries known as "superdelegates" who are likely to decide the nomination.

The superdelegates would convene after the last primaries in Montana and South Dakota on June 3 with the aim of crowning a nominee well before the August 25-28 convention in Denver, he said on Fox News Sunday.

"I think it's hurting us, hurting us tremendously," he said of the protracted battle between Obama and Clinton, which polls suggest is helping drive up support for McCain.

Bredesen said the Democrats would eventually find a standard-bearer, "but if it's the nominee of a divided party and an emotionally exhausted party, there's just not time to conduct the kind of campaign we need to have."

Obama, while refusing to back the calls for Clinton to quit, also said the nominee needed enough time before the convention to select a running mate and allow the party to regroup for the larger battle in November.

Clinton needs a big win in Pennsylvania to boost her argument that only she can win hefty states that Democrats need to recapture the White House.

She is leading Obama by double digits in most polls here, but that gap could narrow as he steps up his campaigning on the approach to the primary.

The Illinois senator fed a calf with a giant bottle of milk on a stop Sunday at the Penn State Agriculture Facilities, before holding a packed rally at a branch of the state university.

"You guys look good," Obama told reporters forced to wear blue plastic boots to keep disease out of the dairy complex. "I bought some new shoes," he said, explaining why he escaped the barnyard chic look.

Jean Montgomery, a bowling alley owner from the town of Altoona, said she believed Obama's visit might be helping change many minds.

"I think it's wonderful he came," she said. "He's very friendly. I'm not real political. Probably now that he came in I will support him."