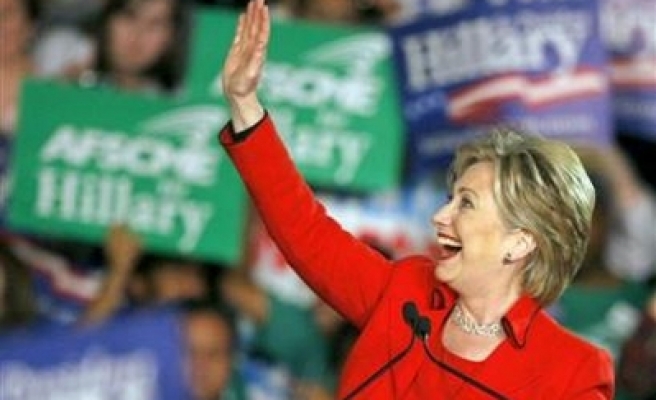 The New York Senator beat Barack Obama in Texas by only 4 percentage points with 76 percent of the precincts counted.

In Ohio, a "must-win" state for Clinton's campaign, she led Obama by 55 percent to 43 percent, according to the results of 88 percent of the precincts, a much wider lead than indicated by pre-primary polls.

"For everyone here in Ohio and across America who has ever been counted out but refused to be knocked out, for everyone who has stumbled but stood right back up, and for everyone who works hard and never gives up," she told a rally in Ohio.

Her popularity in the state was buttressed by a large number of blue-collar workers, Catholics, elderly and white women voters, political analysts said.

According to CNN exit polls, Clinton gained 54 percent of female votes in Ohio while Illinois Senator Obama took a lead among male voters at 52 percent.

Among voters without college degrees, who account for 63 percent of the total, Clinton was the preferred choice of 55 percent. But Obama prevailed among those who had received higher education.

Clinton, considered more trustworthy in handling economic affairs, won the support of 52 percent of voters who are worried about their financial situation, a segment that made up 78 percent of the total Democratic voters.

Rhode Island, demographically similar to Ohio, also proved lucky for Clinton, who defeated Obama by 58 percent to 40 percent there.

CNN exit polls showed that Clinton won 67 percent of the Latino vote while Obama garnered 83 percent of the black vote in the state. Latinos make up 34 percent and blacks 19 percent of total Democratic voters in Texas.

The populous states of Ohio and Texas will offer a proportional combination of 334 delegates to Democratic candidates, which could be the big deciding factor in the choice of the party's presidential nominee.

Despite a big win Tuesday, Clinton still failed to overtake Obama in the number of delegates. Obama's share has increased sharply as a result of 11 straight victories over the past month.

"We know this: no matter what happens tonight, we have nearly the same delegate lead as we had this morning, and we are on our way to winning this nomination," Obama told supporters in Texas after winning the Vermont primary at 60 percent, compared with Clinton's 38 percent.

Political analysts had predicted earlier that victories in Ohio and Texas could stop Clinton's campaign from slipping toward the end, but she was unlikely to restore her lead without winning by a big margin.

A Democratic candidate needs to garner 2,025 delegates of the total 4,049 to secure the party's presidential candidacy.