The chief prosecutor of the Supreme Court of Appeals applied to the Constitutional Court on Friday evening demanding that Prime Minister Recep Tayyip Erdoğan's ruling Justice and Development Party (AK Party) be disbanded. 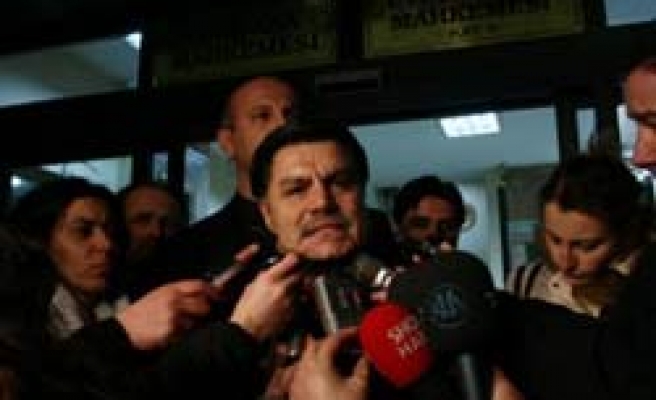 The chief prosecutor of the Supreme Court of Appeals Abdurrahman Yalçınkaya filed a court request for the closure of the AK Party, accusing it of "being a hotbed of anti-secular activities." The party won 47 percent of the votes in last year's general election.

In addition to the AK Party's disbanding, the prosecutor demanded a five-year ban from involvement in politics for 71 senior AK Party administrators, including Prime Minister Erdoğan and President Abdullah Gül.

The indictment -- comprised of 17 folders, according to initial reports-- lists news stories that were printed in the press, including statements and certain implementations allegedly committed by AK Party mayors, such as an alcohol ban that was overturned by the Council of State or the construction of gender-segregated parks, as evidence for the charges.

Although the complete list of evidence was not immediately available, some of the news clips that made their way into the case file had been refuted, reports said. Prime Minister Erdoğan and deputy chairmen of the AK Party immediately convened to discuss the situation.

In initial comments made to the private NTV news channel, AK Party deputy and constitutional law professor Zafer Üskül said he did not believe it would be possible for the top court to close the AK Party. "First off, they will have to review the accusation. If this goes to trial, then the Constitutional Court will want to hear the defense of the AK Party. I don't think a closure of the AK Party is possible. However, that the charges were even filed is very unfortunate for Turkey.

Really, this party came to power in an entirely democratic election on July 22 [2007]. It is extremely nonsensical to claim that the AK Party is straying away from democratization. Only the opposite of this can be said. The AK Party wants democratization more than others. Most certainly, there will be a legal process, but closure is simply out of question. However, the filing of the charges will hurt the country's stability."

He said he did not know the concrete charges, but maintained that not a single law or regulation among those adopted by the AK Party government was in violation of the principle of secularism. "Nor has there have there been any acts [on the part of AK Party members] that violate secularism," he said.

In response to a question on whether the AK Party's recent move to change two constitutional articles to allow the headscarf on university campuses -- a practice banned for nearly two decades in Turkey -- Üskül said the changes to the constitution were about strengthening the guarantee of the right to education and expanding the equality of all citizens before the law.

"Neither of these two changes to the constitution have anything to do with secularism. It is not possible to claim that they are unlawful," he explained.

GUL: EVERYBODY SHOULD BE CAREFUL

President Abdullah Gül, a member of the AK Party, expressed concern about the probable negative effects the case might have while speaking to reporters in Dakar, Senegal, where he is participating in a summit of the Organization of the Islamic Conference (OIC).

"Everybody should be very careful and should thoroughly think over what Turkey will lose or gain via a case opened against the ruling party, which has a huge majority in Parliament," Gül was quoted as telling reporters by the CNN Türk news channel. The president, a former minister and a founder of the ruling party, avoided further comment on the issue due to his current position as president. Yet CNN Türk reported that his disappointment could be read from his brief remarks.

Gül also ruled out any similarity between the closure case opened against the now-defunct Welfare Party (RP) and the AK Party, CNN Türk reported. He was a deputy chair of the RP at the time of its closure. Politicians and rights organizations expressed grave concern in their initial remarks about the case.

BAYKAL NOT MAKE ANY STATEMENT YET

Republican People's Party (CHP) leader Deniz Baykal was informed of the closure lawsuit at his home. While it was stated by CHP officials that Baykal would not make any statement on the issue, it did not escape the attention that he chose to make an indirect statement through the deputy president of his party, Mustafa Özyürek, who noted that the prosecutor was exercising his authority granted by the law.

"According to the laws in effect, if a party is committing a crime and has really become a 'hotbed of 'anti-secular activities,' in accordance with the claim of the chief prosecutor, the office of the chief prosecutor is left with no other choice but to file this closure lawsuit," Özyürek said, adding that it was really unfortunate for a ruling party to have come to be labeled as a party that has become a center of anti-secular activities.

Mehmet Sevigen, a member of Parliament and the deputy secretary general of the CHP said, "I don't support AK Party's closure, but I think the case should be heard." He said earlier statements made by Prime Minister Erdoğan about overthrowing the secular system and similar remarks by other AK Party members should not go unheard.

MHP DOES NOT FAVOR IDEA OF CLOSING PARTIES

Nationalist Movement Party (MHP) deputy chairman Metin Çobanoğlu said his party does not favor the idea of closing down political parties. "Political parties should carry out their political activities within the bounds of the constitution. Yalçınkaya should clearly express why he asked for the closure of the ruling AK Party. Shutting down parties will bring no good to our country. No lawsuit should be filed against people or institutions based on assumptions," he said.

Hasip Kaplan, the Şırnak deputy of the pro-Kurdish Democratic Society Party (DTP), which is facing closure over charges of "ethnic separatism" by the same prosecutor, said: "In a democracy, freedom of speech and the freedom to organize are fundamental rights. Turkey is turning into a political party cemetery. Turkey should get rid of this problem immediately by making a new constitution. Members of the judiciary do not have the right to use the law as a political instrument. The only thing that should be able to close down a political party is the ballot box."

Human Rights Association (İHD) head Yusuf Alataş said: "There is nothing much to say. It is possible to criticize the AK Party, but to open a court case against it is really worrisome and it is really sad. It shows that everyone needs laws. When some parties were being closed down, others did not raise their voice against it, but of course this does not mean that the case against the AK party is justifiable. Everybody should make efforts to strengthen democracy in Turkey."

Serap Yazıcı, an associate professor of constitutional law at İstanbul's Bilgi University and the only female member of the six-person team of academics preparing Turkey's draft constitution, said only two parties have been closed in Germany in its history, compared to 18 parties in Turkey since the its 1982 constitution was drafted after a coup.

"The parties that were shut down appealed against the decision of closure at the European Court of Human Rights. Our constitutional court should consider the decisions of the European court. And, as Turkey is a party to international agreements, it should act in line with international laws regarding these matters, not according to its political parties law," she said.

Remarks from members of the European Parliament also poured in within hours of the indictment news.

European Parliament member Cem Özdemir, an ethnic Turk, said sarcastically, "The state should select itself a new people." He said the indictment was tantamount to telling half of the country that they are not a part of Turkey.

Turkey-EU Joint Parliamentary Committee Co-Chair Joost Lagendijk told a Today's Zaman correspondent in Brussels in his initial remarks: "I am shocked. I am finding it hard to take such a court case seriously. I fail to see how a prosecutor can reach such a conclusion. This represents a mentality that has not been able to adapt to the 21st century." Lagendijk said Turkey needed a new generation of judges and prosecutors. "This will deal a blow to Turkey's image in Europe," he said, adding that he hoped the constitutional court would reject hearing the case.

Johannes Swoboda, the vice president and parliamentary manager of the Socialist Group in the European Parliament, also commented he was shocked by the news that a state prosecutor has asked Turkey's top court to shut the ruling AK Party down for anti-secular activities.

'HOW AK PARTY BECOME A CENTER OF ANTI SECULAR ACTIVITIES?'

"This is against the will of the Turkish people and democracy. I do not understand how the AK Party has become a center of anti-secular activities. This has no relation to reality and shows how fragile the Turkish democracy is. Turkey should immediately review its law on political parties and make such cases of party closure almost impossible," Swoboda said.

Jan Marinus Wiersma, also a vice president of the Socialist Group in the EP said, "I have never seen anything like this in my political life. This is the interference of a prosecutor into politics." He referred to the incident as "disquieting and strange for Europe." He said it was most strange to try to crush the AK Party by asserting that it is Islamizing Turkey. "I have never felt that the AK Party has had such an agenda. There is not a trace of suspicion suggesting this in any of the laws it passed. If this is about the headscarf, that cannot be a reason. This shows that the Turkish judiciary cannot be impartial."

Chief prosecutor Abdurrahman Yalçınkaya was appointed to his post by the previous president, the staunchly secular Ahmet Necdet Sezer, despite him being the first runner-up in the election in the Supreme Court of Appeals.

Although the full text of the indictment or any of the charges were not immediately available to the press, in a speech he made on Jan. 17, Yalçınkaya had implied that a closure case for the AK Party might be in store.

If the Constitutional Court after its initial review decides to accept the indictment, the file will be sent to the AK Party to prepare a defense statement. After the AK Party sends in its indictment, Prosecutor Yalçınkaya will express his technical opinion on the case. Later, AK Party officials will testify in their own defense. Once that process is complete, the reporters of the Constitutional Court on the case will prepare a technical report.