Colombia says French-Colombian politician, three Americans and 11 other hostages were rescued from Farc guerrillas on Wednesday. 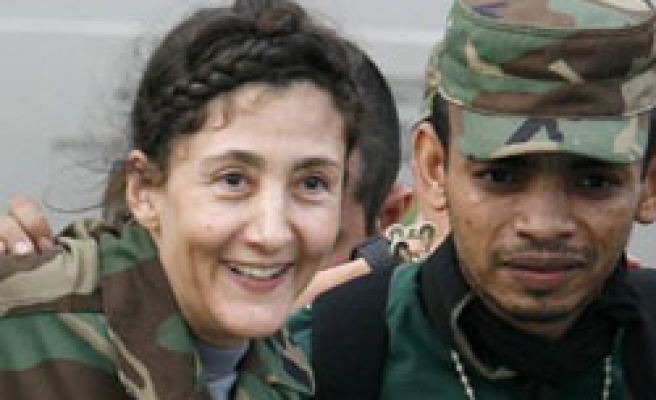 Santos said all of the former captives were in reasonably good health after being held for years in secret jungle camps.

The rescue took place on Wednesday in the southern jungle province of Guaviare. Fifteen long-term kidnap victims were rescued in all, including Betancourt and the three Americans, Santos said.

The news was a coup for popular President Alvaro Uribe, an anti-guerrilla hard-liner who has used billions of dollars in U.S. aid to push the rebels onto the defensive, cut crime and spark economic growth.

"This was an unprecedented operation," Santos told reporters. "It will go down in history for its audaciousness and effectiveness."

The Revolutionary Armed Forces of Colombia, known as the FARC, has been holding about 40 high-profile hostages it has sought to exchange for jailed rebels.

Betancourt, a former presidential candidate with dual nationality, was kidnapped by the FARC in 2002. She was last seen in a rebel video at the end of last year looking gaunt and despondent.

"I am filled with happiness," Betancourt's sister, Astrid, told Colombian radio. "These have been long years of waiting."

The Americans, three Defense Department contract workers, were captured in 2003 after their light aircraft crashed in the jungles while on a counternarcotics operation.

In Paris an aide to President Nicolas Sarkozy, asked about the news, said the presidency had no comment to make for the moment and that it could not confirm the news.