It was the first such protest since two top rebel leaders were killed in March, one in a bombing raid and the other betrayed and dismembered by his own bodyguard in return for a government reward. 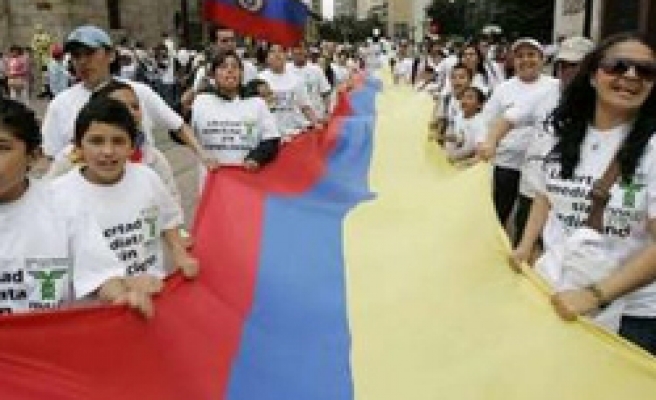 Hundreds of thousands of shouting, weeping and flag-waving Colombians marched on Sunday, calling for an end to the kidnappings that have plagued the country during its 44-year-old guerrilla war.

Declaring that this year's Independence Day should be renamed "Freedom Day" for the 2,800 captives held in secret jungle camps, Colombians rallied throughout the country and voiced growing hope for an end to the conflict.

They called on the Revolutionary Armed Forces of Colombia, known as FARC, and other illegal groups to stop taking hostages and enter peace talks.

The march further pressured the rebels, who have suffered recent severe setbacks as a result of President Alvaro Uribe's U.S.-backed military offensive.

It was the first such protest since two top rebel leaders were killed in March, one in a bombing raid and the other betrayed and dismembered by his own bodyguard in return for a government reward. The state had never before hit the FARC's governing secretariat.

"For the first time in my lifetime we are really starting to believe that peace is possible," said Adriana Correa, 30, a public employee who participated in the demonstration.

Uribe is seen as a hero by many Colombians for going on the attack against the leftist guerrillas who have been fighting since the 1960s. His popularity topped 90 percent after the dramatic rescue of 15 high-profile hostages on July 2.

Related demonstrations were held in cities around the world including Paris, where recently released captive Ingrid Betancourt addressed an emotional crowd before a concert by Colombian pop star Juanes.

Betancourt, a French-Colombian politician freed in the July 2 operation after more than six years of captivity, called on the rebels to lay down their arms and negotiate with Uribe, whose father was killed in a botched FARC kidnapping in 1983.

"We are going to shout out to the jungles," said Colombian singer Carlos Vives before a concert in the steamy Amazon town of Leticia.

He hoped his music would reach some of the estimated 700 hostages held by the FARC for ransom and political leverage. The other captives are held by a variety of criminal groups.

Local television interviewed a boy marching with his mother in Bogota. He carried a framed picture of his kidnapped father. Looking into the camera he said, "Don't lose hope, Dad."

The three leaders signed a pact on Sunday to increase patrols of the river areas along the borders shared by the countries in the Amazon region, a bid to further tighten the noose around the FARC and its main source of income, cocaine.

"This is very important because the rivers of the Amazon jungle are the highway used by the criminals," said Uribe's defense minister, Juan Manuel Santos.

Betancourt, three American defense contractors and 11 other hostages held by the FARC were rescued when the rebels were duped into turning their most-prized captives over to soldiers disguised as aid workers.

Family members of remaining hostages worry that international pressure might die down now that Betancourt and the Americans are free.