There have been conciliatory calls for restraint from Shiite religious leaders after an attack Wednesday at one of their holiest shrines, the al-Askari (Golden Mosque) in Samarra, north of Baghdad. 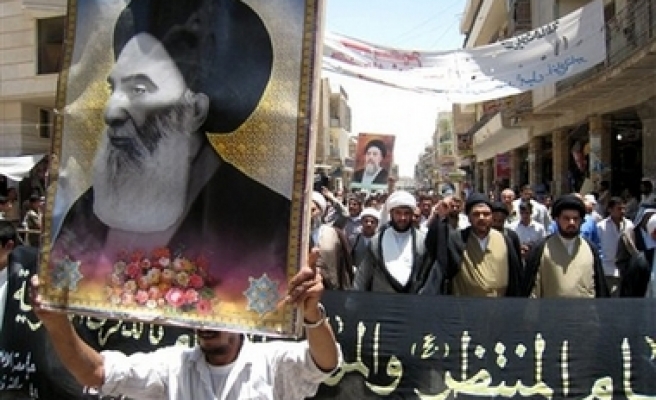 There have been conciliatory calls for restraint from Shiite religious leaders after an attack Wednesday at one of their holiest shrines, the al-Askari (Golden Mosque) in Samarra, north of Baghdad.

The attack at 9 am local time damaged two minarets of the complex whose bombing last Feburary unleashed a wave of sectarian bloodshed. The spokesman of Iraq's most respected Shiite cleric Grand Ayatollah Ali al-Sistani told the Reuters news agency: "He condemns the attack and urges calm and not to do acts of reprisal against Sunnis". Moqtada al-Sadr has called for "peaceful demonstrations" and three days of mourning.

His statement said that no Sunni Arab could have been responsible for Wednesday's bombing.

Al-Sadr said peaceful protest was neccessary "to show that the only enemy of Iraq is the occupation [of US-led coalition forces] and that's why everyone must demand its departure or scheduling its presence."

Prime Minsiter Nouri al-Maliki has met US coalition force leaders about boosting security and an indefinite curfew has been imposed in the capital Baghdad from 1500 local time until further notice.

The shrine houses the remains of the 10th and 11th imams believed to be descendants of the Prophet Mohammed. Samarra is a mainly Sunni Muslim area.

Wednesday's attack was intended to trigger more sectarian bloodshed a source at the Shiite Waqf, the office that overseas Shiite religious shrines and sites told AKI.

The official, who asked to remain anonymous, stressed that "the responsibility of this new incident is the government which has failed to guarantee protection for holy places despite repeated almost daily attacks".

The source added that "the continuation of such incidents confirms the failure of the Security Plan of the al-Maliki administration which must be reviewed to avoid further more serious attacks".
Last Mod: 13 Haziran 2007, 16:09
Add Comment