The Democratic-controlled US congress has approved $95 bn in new funds for the wars in Iraq and Afghanistan without any timetable for withdrawing troops. 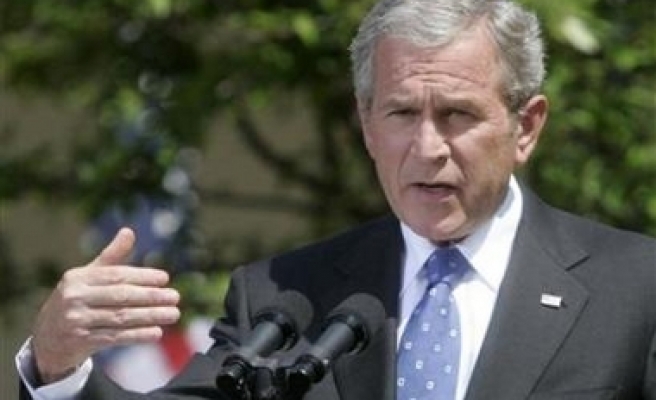 The Democratic-controlled US congress has approved $95 bn in new funds for the wars in Iraq and Afghanistan without any timetable for withdrawing troops.

The senate voted 80-14 to send the compromise measure to the president after the House of Representatives cleared the measure 280-142, with Republicans supplying the bulk of the votes.

Besides abandoning their plan for a troop withdrawal timeline, Democrats gave up on attempts to insert provisions to require the Pentagon to adhere to troop training, readiness and rest requirements.

The bill does establish, however, a series of goals for the Iraqi government to meet as it tries to rein in sectarian violence.

Continued US reconstruction aid would be conditional on progress toward targets.

Bush, however, retains the authority to order spending regardless of how the Baghdad government performs.

George Bush, the US president, said on Thursday before congress voted: "The Iraqi government needs to show real progress in return for America's continued support and sacrifice."

Bush, who had vetoed an earlier version that had tied the funding to a pullout schedule, is expected to sign the new bill into law.

Democrats in both houses coupled their concession on Thursday to the president with pledges to continue challenging his policies.

"This debate will go on," Nancy Pelosi, the house speaker, said.

Harry Reid, the senate majority leader, added: "Senate Democrats will not stop our efforts to change the course of this war until either enough Republicans join with us to reject President Bush's failed policy or we get a new president.''

In an unusual manoeuvre, House Democratic leaders came up with a procedure that allowed their rank and file to oppose money for the war, then step aside so Republicans could provide the bulk of votes needed to send it to the senate for final approval.

The legislation includes nearly $95 bn to pay for the wars in Iraq and Afghanistan until September 30.

With this latest instalment, the US will have allocated more than $565 bn for the wars in Iraq and Afghanistan since 2001, according to the Congressional Research Service, most of it going to Iraq.

In exchange for providing the war money on Bush's terms, Democrats won White House approval for about $17 bn in spending above what the administration originally sought.

About $8bn of that was for domestic programmes ranging from hurricane relief to farm aid to low-income children's health coverage.

Democrats also won a top priority: the first minimum wage increase in more than a decade.

The current federal wage limit of $5.15 an hour will go to $7.25 in three separate instalments of 70 cents.

Reflecting unhappiness among conservatives in his own party, Bush said he would have preferred less domestic spending than the bill contained.

"But still, by voting for this bill members of both parties can show our troops and the Iraqis and the enemy that our country will support our servicemen and women in harm's way,'' he said at a news conference.

Bush ordered the deployment of an additional five brigades to Iraq in January to try to quell sectarian violence, and he said the summer months would be critical to the fate of the new strategy.

General David Petraeus, the commander in Iraq, has pledged to report to the administration and congress in September on the progress made in the war, and Bush readily conceded that fighters will make sure there is heavy fighting in the interim, saying "it could be a bloody - it could be a very difficult August".

But with a new poll showing that 80 per cent of self-described independents oppose the war, it is unclear how long Bush can fend off his Democratic critics in congress, or even count on Republicans to back him.
Last Mod: 25 Mayıs 2007, 10:25
Add Comment