A hazy ring of dark matter spawned by a colossal cosmic crash eons ago offers the best evidence to date that vast amounts of this mysterious stuff reside in the universe, scientists said today. 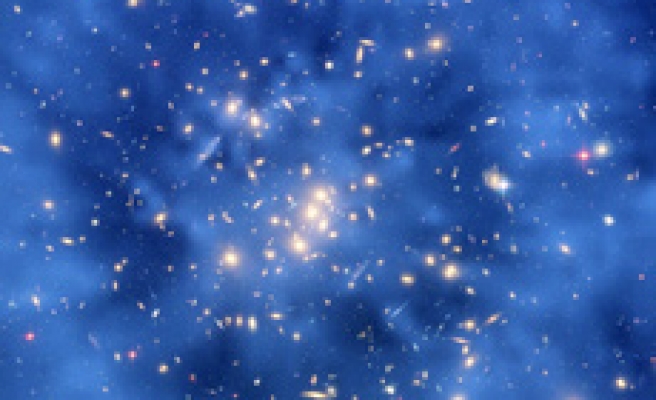 A hazy ring of dark matter spawned by a colossal cosmic crash eons ago offers the best evidence to date that vast amounts of this mysterious stuff reside in the universe, scientists said today.

"This is the strongest evidence yet for the existence of dark matter," astronomer Myungkook James Jee of Johns Hopkins University in Baltimore told reporters.

Astronomers believe dark matter -- as opposed to ordinary matter making up the stars, planets and the like -- comprises about 85 per cent of the universe's material, but evidence of it has been difficult to come by.

Dark matter cannot be directly seen. It does not shine or reflect light, but astronomers infer its existence in galaxy clusters by observing how its gravity bends the light given off by even more faraway galaxies. They do not know what it is made of, but think it could be a kind of particle.

Astronomer Richard Massey of the California Institute of Technology, not involved in the research, said the findings are facing scepticism within the astronomical community.

"It's really exciting if it's right. But to be sort of convinced of the ring, astronomers would really want to see some independent observations verifying it," Massey said.

Scientists came across the new evidence while studying the distribution of dark matter within a galaxy cluster designated as Cl 0024+17.

Wondering about the genesis of this ring, the researchers came across earlier work showing that the galaxy cluster had run into another cluster 1 billion to 2 billion years ago.

They developed computer simulations of such collisions that indicated when two clusters collide, the dark matter cascades toward the centre of the newly combined clusters, then moves back outward while slowing under gravity's pull.

"The collision between the two galaxy clusters created a ripple of dark matter that left distinct footprints in the shapes of the background galaxies," Jee said.

"It's like looking at the pebbles on the bottom of a pond with ripples on the surface. The pebbles' shapes appear to change as the ripples pass over them. So, too, the background galaxies behind the ring show coherent changes in their shapes due to the presence of the dense ring," Jee added.

Dark matter previously has been detected in other galaxy clusters, but the scientists said the stuff never previously had been found to be so distinctly separated from the hot gas and the galaxies that make up these clusters.

"Given that dark matter is the most common stuff in the universe, the fact that we know almost nothing about it at the moment is really rather embarrassing," Massey said. Last Mod: 16 Mayıs 2007, 16:01
Add Comment