Hundreds of towns and villages were flooded, with more than 40,000 houses affected and 2,000 homes still under water in western Ukraine and Moldova on July 23-27. 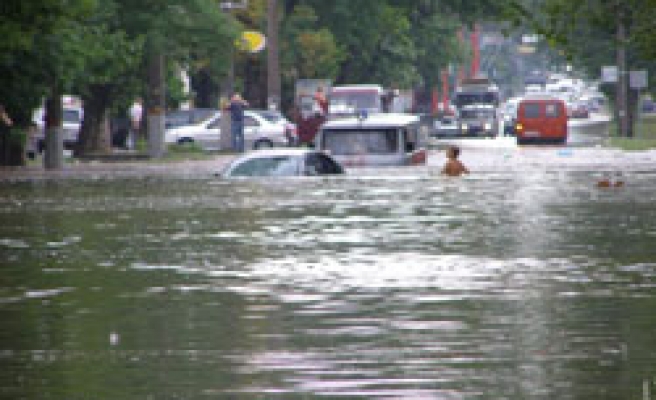 The International Chidlren Centre Artek received 870 children from the Western regions of Ukraine suffered from the flood on August 5. Among them, 600 children from Ivano-Frankivsk oblast and 270 children from Chernivtsi oblast. As Mrs. Tetyana Umrikhina, Deputy Head of the Council of Mınistries of Crimea, noted, these children would place in the children camps Polevyi, Kryshtalevyi and Lazurovyi.

These children were immediately given every attention and encouragement by pedagogues, physicians and other workers of the Artek.

According to Mrs. T. Umrikhina, the meticulous medical examination for children will be had in the Artek. Also she stressed the children would receive the consultation of different medical specialists and undergo medical treatment. Moreover, the Artek's psychologists will work with these children in the camps.

The children will stay in the Artek's camps the whole period where they will able to participate in sport competitions, excursions, walking trips, sails, etc.

These children were seen off personally by the President of Ukraine Victor Yushchenko.

QHA news agency said that he enterprises and organizations in Crimea conduct the fund-raising campaign for victims of the flood in Kosiv rayon, Ivano-Frankivsk oblast. Mr. Yevhen Mykhaylov, 1st Deputy Head of the Council of Ministries of the ARC, informed about it on 1, August.

He also noted, besides the financial aid, the countrymen from Ivano-Frankivsk region will be given opportunity to rest in the Crimean sanatoriums and boarding guest houses where they will able stay during whole period needed for mental and physical rehabilitation, according to the press-cutting service of the Crimean government.

1st deputy Head stated Crimea is ready to receive adults and children for health improvement from Ivano-Frankivsk oblast and other Ukrainian regions suffered from natural disaster.

Now the working group of the Crimean government, established under the commission of the Office of the President of Ukraine, is in Kosiv rayon, Ivano-Frankivsk oblast where it renders its assistance for overcoming of the natural disaster's consequences.

A total of 38 people, including eight children, are dead or listed as missing following devastating floods in western Ukraine in late July, the health ministry said in a statement on Monday, according to RIA Novosti.

Thousands of people were evacuated as storms swept across western Ukraine and Moldova on July 23-27. Hundreds of towns and villages were flooded, with more than 40,000 houses affected and 2,000 homes still under water.
Last Mod: 06 Ağustos 2008, 16:53
Add Comment