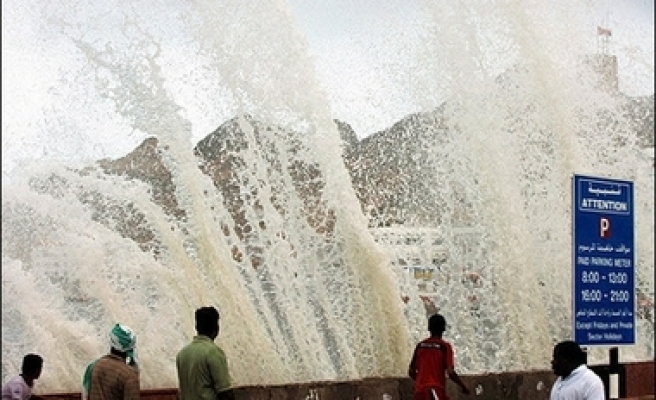 A powerful cyclone hit Oman's central coast with strong winds and rain early Wednesday, after thousands of residents fled to higher ground. Forecasters said the Arabian Peninsula's strongest storm in 60 years was on a course for southern Iran and the oil-rich Persian Gulf.

Cyclone-force winds of Gonu, which had been churning northwest through the Indian Ocean, buffeted coastal towns including Sur and Ra's al-Hadd and heavy rains drenched the capital, Muscat, and surrounding communities, Civil Defense officials said.

At 11 p.m. EDT, Cyclone Gonu was centered just off central Oman, about 115 miles southeast of Muscat and was traveling along the coastline at about 9 mph, according to the U.S. military's Joint Typhoon Warning Center.

The steadily weakening storm was still packing sustained winds of 92 mph with gusts of up to 115 mph and churning up ocean waves as high as 35 feet, civil defense officials and forecasters said.

"Everyone is cocooned in their houses. ... Shops and businesses are closed," said Narayanan, whom NowPublic.com reached out to in Oman. NowPublic.com is a journalism Web site with 98,000 members in 3,500 communities worldwide. The AP began working with NowPublic this year to obtain citizen journalism images and video for distribution to news organizations.

Narayanan said he had heard no reports of any serious injuries or damages from the storm. But he added that "it was raining cats and dogs" and many city streets were flooded.

An hour later, Narayanan wrote in his blog: "At 5:50 a.m., we have noticed rains have subsided considerably. ... Some of the wadis have started flooding causing roadblocks."

He said many Omanis — unaccustomed to cyclones — were alarmed. "They haven't had this kind of fear before."

Forecasters said Gonu was expected to weaken with winds dropping to around 70 mph by midday Wednesday and skirt the region's biggest oil installations. Analysts warned it could disrupt shipping in the Straits of Hormuz, causing a spike in prices.

Oil prices rose on Monday but retreated Tuesday, although the storm weighed heavily on the market.

"If the storm hits Iran, it's a much bigger story than Oman, given how much bigger an oil producer Iran is," said Antoine Haff of FIMAT USA, a brokerage unit of Societe Generale. "At a minimum, it's likely to affect tanker traffic and to shut down some Omani oil production as a precautionary measure."

Gonu, which means a bag made of palm leaves in the language of the Maldives, was expected to hit land in southeastern Iran late Wednesday or early Thursday, according to AccuWeather.com meteorologist Donn Washburn.

The Joint Typhoon Warning Center, a U.S. military task force that tracks storms in the Pacific and Indian oceans, predicted rough seas in the Straits of Hormuz, the transport route for two-fifths of the world's oil and the southern entrance to the Gulf.

In Tehran, the government's Department of Meteorology predicted heavy rain and strong winds along Iran's southeastern coast. Storm warnings had been issued and some damage was expected, the department said.

On Tuesday, as the cyclone approached, authorities evacuated nearly 7,000 people from Masirah, a lowland island off the east coast of Oman, according to Gen. Malik bin Suleiman al-Muamri, head of the country's civil defense. Oman's main international airport in Muscat was also closed.

Masirah Island includes one of four air bases that the Omani government allows the U.S. military to use for refueling, logistics and storage, although little has been revealed publicly about U.S.-Oman military ties.

The Masirah base hosted U.S. B-1B bombers, C-130 transports and U.S. Special Forces AC-130 gunships during the war in

Afghanistan, and the United States has continued to have basing rights on the island.

U.S. forces are preparing for Gonu "just like anyone would prepare for such a cyclone," said Lt. Denise Garcia, a spokeswoman for U.S. Naval Forces Central Command, which is based in Bahrain. She declined to provide more details.

She said U.S. Navy ships in the Persian Gulf and elsewhere in the region were also taking precautions to avoid Gonu, but there was no major overhaul of operations. The U.S. military has offered its assistance to Oman, but so far, Omani authorities have not requested help, she said.

Oman's major oil installations, which were not directly in the storm's projected path and nowhere near as extensive as those of its neighbors, continued operations but took precautions as Gonu approached.

In neighboring Saudi Arabia, the government said the country and oil markets would not be seriously affected by the storm.

But some oil analysts said the storm could have a damaging effect on the oil market.

Manouchehr Takin, an analyst at the Center for Global Energy Studies in London, said the real fear is that the loading of tankers might be delayed by the storm.

"About 17-21 million barrels a day of oil are coming out of the Persian Gulf. Even if only some of the tankers are delayed, that could reduce the supply of oil and increase prices," Takin said.

Even with the weaker wind speeds, Gonu is expected to be the strongest cyclone to hit the Arabian Peninsula since record keeping started in 1945.

A cyclone is the term used for hurricanes in the Indian Ocean and Western Pacific.