Tens of thousands of Pakistanis fled to higher ground Tuesday as a tropical cyclone lashed the coastline with heavy rains and high winds, officials said. 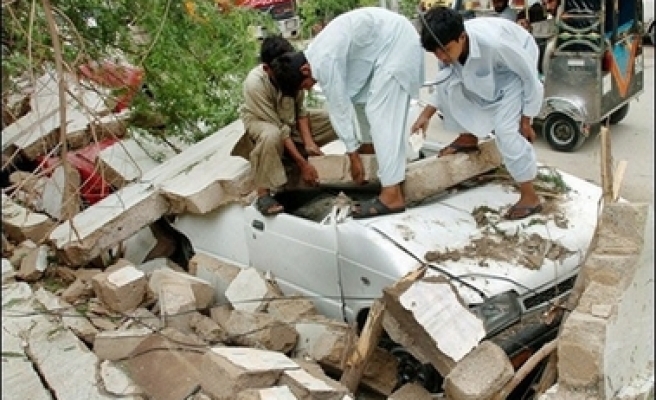 Tens of thousands of Pakistanis fled to higher ground Tuesday as a tropical cyclone lashed the coastline with heavy rains and high winds, officials said.

At least three small boats were reported to have sunk and 18 fishing boats were missing as the navy sent a warship and two helicopters to scour the rough seas in search of vessels caught up in the storm.

Cyclone Yemyin first hit parts of the coastline of Baluchistan province with winds of up to 57 mph, said Qamaruz Zaman, director-general of the Pakistan Meteorological Department.

The storm's intensity was decelerating and would subside by evening but not before dumping heavy rains that could last through the night, he said.

Pakistan's largest city of Karachi was lashed by torrential rains and thunderstorms in recent days, with at least 228 people dying Saturday in the storm.

Rains and flooding also killed 38 people over the weekend in neighboring India, raising the death toll there to 129 since the monsoon season set in four weeks ago, according to official reports.

In Pakistan, officials warned of coastal flooding, prompting many to flee in panic.

Most of the 120,000 residents of the southwestern port city of Gwadar moved to higher ground, Mayor Abdul Ghaffar Hoth said.

People from several smaller towns nearby loaded possessions onto camels or into cars and headed for higher ground, he said.

"We have imposed an emergency in the district and asked the army and other forces to be on alert," Hoth said.

On the high seas, one boat with 13 crew aboard was rescued by the navy as it was sinking while the search continued for at least three others, two of which reportedly sank, said Lt. Mohammed Shahzad, spokesman for the Maritime Security Agency.

At least 18 fishing boats plying waters near India were missing, said Nasir Buneri, an official of the Fishermen Cooperative Society. One boat was rescued along with most of its crew.

In Karachi, city authorities were scurrying to repair power cables snapped by the storm, which have caused widespread power outages.

Enraged residents in the sweltering city took to the streets over the weekend to protest, torching vehicles and blocking major roads in the country's economic hub. One person was killed during the riots, police said.