Turkish Cyprus president Talat and Greek Cypriot leader Christofias met at the residence of Taye-Brook Zerihoun, the United Nations special representative to Cyprus, in the buffer zone in Cyprus. 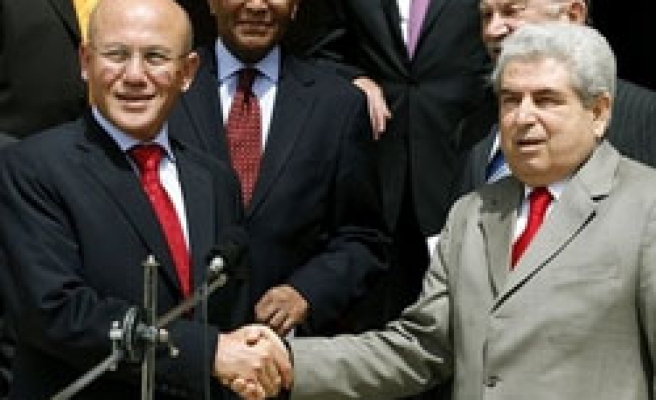 Turkish and Greek Cypriot leaders agreed on Friday to launch comprehensive talks, aiming to find a permanent solution to Cyprus problem.
President Mehmet Ali Talat of the Turkish Republic of Northern Cyprus (TRNC) and Greek Cypriot leader Demetris Christofias met at the residence of Taye-Brook Zerihoun, the United Nations (UN) special representative to Cyprus, in the buffer zone in Cyprus.

"The leaders decided to start full-fledged negotiations on Sept. 3," said Taye-Brook Zerihoun, head of the United Nations mission on the partitioned island, adding that a final settlement would be put to separate referenda in both communities.

Reading a joint declaration, Zerihoun said that Talat and Christofias reviewed the efforts of working groups and technical committees for the last time.

The goal of the comprehensive negotiations has been determined as one that would be accepted by the two sides and that would secure legal basic rights and interests of both the Turkish Cypriots and Greek Cypriots. It was decided that the solution reached would be subject to referenda in the two sides simultaneously, Zerihoun said.

The two leaders reached an agreement on 16 more precautions in the areas of environment, cultural heritage, crisis management, crime and punishment within the framework of the technical committees and gave orders to implement these precautions immediately. The two leaders also decided to establish a red line in order to facilitate direct contact between them, Zerihoun said.

The two leaders expressed pleasure over the appointment of Alexander Downer as the UN Secretary-General's Special Adviser in Cyprus and declared their will to continue working with the UN team and Downer. The two leaders gave orders to their representatives to handle the matters of Yesilirmak gate and other points of passage in the island, Zerihoun also said.

Talat and Christofias first met on March 21st, 2008 and agreed to set up several working groups and technical committees towards a solution in the island.

The measures will be taken in areas of environment, cultural heritage, crisis management and crime and punishment.

Below are environmental measures:

1- Cooperating in closing illegal garbage areas, and re-arranging the areas.

2- Cooperating in exchange of information and experience between experts of the two parties.

6- Cooperating in creation of a joint approach to mining and stone quarry business.
7- Preserving biological diversity and nature.

8- Taking under control and managing maritime and sea pollution.

Below are measures regarding cultural heritage:

Below are measures regarding crisis management and crime and punishment:

16- Exchanging information and intelligence on crime, criminal matters and punishment.

The two parties reached a compromise on six measures on June 20th, including educational and training programs on preservation of cultural heritage, road safety, mutual passage of ambulances, establishment of a joint health committee, environmental training and projects on waste product management.