Turkish and Greek Cypriot negotiators met on Friday for the first time in four years to lay the groundwork for reunification talks between the divided island's leaders that are expected to start in June. 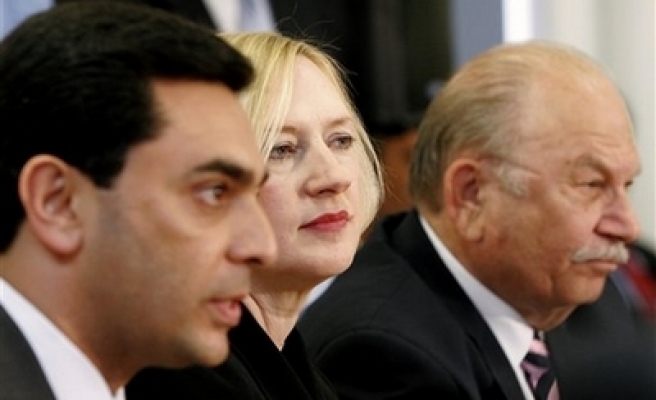 Hopes of reuniting Cyprus, divided between Greek and Turkish Cypriot communities since Turkey entered in 1974 in response to a Greek-inspired coup, have risen since Greek Cypriot Demetris Christofias was elected president in February.

Both he and Turkish Cypriot leader Mehmet Ali Talat say they want a settlement. The 30-year stand-off is a hurdle to Turkey's bid to join the European Union and source of tension between Greece and Turkey, NATO allies who are fiercely protective of their ethnic kin on the island.

"This is a momentous occasion (and) evidence of commitment and determination," said Elizabeth Spehar, acting head of the United Nations mission in Cyprus, as the talks began.

U.N. attempts to reunify the Mediterranean island have repeatedly stalled.

Talat and Christofias have met twice since the Greek Cypriot's election, and are expected to meet again socially on May 7, a spokesman for Christofias said. Both leaders belong to the traditional left and they have a good rapport.

Formal peace talks between them are expected to begin around the end of June, after thirteen teams from the island's Greek and Turkish Cypriot sides have prepared the ground on topics ranging from governance to environmental protection work.

"This is the best opportunity for a solution for many years," said Joan Ryan, Britain's special envoy for Cyprus. "This opportunity must not be missed."

Working groups will look at complex reunification issues such as power-sharing and linking the island's two economies, and technical committees at matters like environmental protection, cooperation on crime prevention and cultural issues.

The two Cypriot sides have in principle agreed on relinking Cyprus as a bi-zonal federation, but disputes on how that will work are deeply ingrained.