Inhabitants of nine Czech municipalities in central and west Bohemia area overwhelmingly rejected the construction of a U.S. radar base on Czech territory in local referenda and one village in a poll, CTK reported. 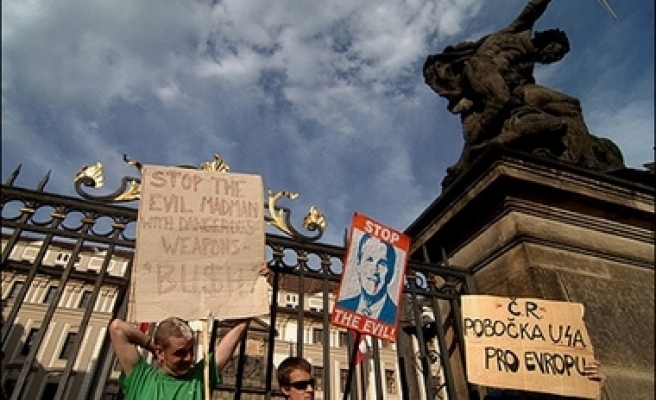 Inhabitants of nine Czech municipalities in central and west Bohemia area overwhelmingly rejected the construction of a U.S. radar base on Czech territory in local referenda and one village in a poll, CTK reported on Saturday.

Referenda on the radar base took place in seven towns and villages in Rozmital pod Tremsinem, Bezdekov pod Tremsinem, Vesin, Sedlice, Volenice, Vranovice and Vsevily, in central Bohemia area, bordering on the Brdy grounds, where the planned U.S. base is to be located.

An absolute majority of voters participated in referenda in most of municipalities. A majority of inhabitants expressed disagreement with the radar base.

In west Bohemia area, most inhabitants of villages Hurky and Stitov said no to the U.S. base in referenda, while in Mesno the radar base was rejected in a poll.

Local inhabitants complained that they have not received sufficient information on the radar base and its possible impact on their health, environment and local administration.

Results of local referenda are not binding on the government or parliament.

There have been a number of other local polls on the plan, with all of them having rejected it.

The United States made a formal request in January to place a radar base in the Brdy military area southwest of Prague and 10 interceptor missiles in neighboring Poland as part of a planned global missile defense shield.

More than 60 percent of Czechs opposed the establishment of the U.S. radar base. The plan is also opposed by the surrounding municipalities of the military district of Brdy where the base would be built. Last Mod: 10 Haziran 2007, 14:45
Add Comment