Czechs oppose to US radar base: Poll

64 per cent of Czechs opposed placing a US missile shield radar on Czech soil in an opinion poll, reports said Friday. 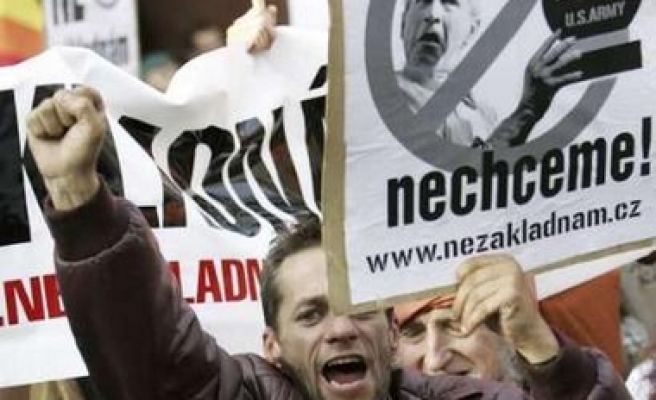 Just days after US president George W Bush's visit to the Czech Republic, 64 per cent of Czechs opposed placing a US missile shield radar on Czech soil in an opinion poll, reports said Friday.

According to the opinion poll conducted by Factum Invenio polling agency for the Czech Foreign Ministry, 30 per cent of those 955 surveyed supported the US facility. "The support has been steady," agency's pollster Jiri Cerny told Dpa.

Pollsters began the week-long survey only two days after Bush met Czech leaders in Prague on June 5 in a bid to win more support for the US missile shield plans in Europe.

Cerny said that fewer people remain undecided in comparison to earlier polls. The previous one was held in early May. "The number of opponents has risen by 3 per cent at the expense of those undecided," he said.

The poll also revealed that Czechs are divided over the security the US facility may or may not provide. "The most important reason for being for or against is the question of security," Cerny said.

While the supporters opine that the radar would enhance their security, the opponents believe that the facility would put them at greater risk.

The results echoed those of an earlier poll carried out after Bush's visit by STEM polling agency for Czech Television. Sixty-seven per cent of 648 polled Czechs opposed the base, while 33 per cent supported it. Last Mod: 22 Haziran 2007, 20:35
Add Comment