Eurosceptic Czech President Vaclav Klaus and some others in his ruling Civic Democratic Party said the Irish vote meant the treaty was dead and should be abandoned. 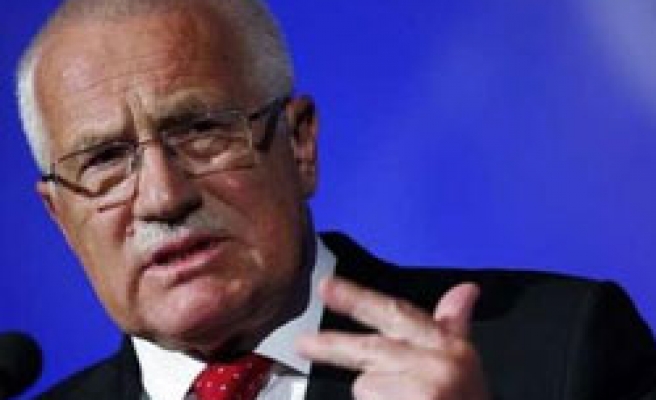 The Czech Republic resisted pressure on Monday to quickly ratify the European Union's reform treaty after its defeat by Irish voters, and kept its options open on how to proceed with the charter.

French President Nicolas Sarkozy, who was to meet the prime ministers of four central European EU states in Prague, has led calls for the ratification process to continue around Europe despite Ireland's "No" vote.

But the pressure has hit a snag in the Czech Republic, one of nine EU countries which have not ratified the pact. Its eurosceptic President Vaclav Klaus and some others in his ruling Civic Democratic Party said the Irish vote meant the treaty was dead and should be abandoned.

Prime Minister Mirek Topolanek, a Civic Democrat who signed the treaty for the Czech Republic, said there could be no hurrying a decision on how to go forward but it was clear the treaty would not enter force on Jan. 1 next year as planned.

"We are relatively cautious in statements on the matter and want to sit down at the European Council, find a short term solution and a path forward," he told reporters.

"I do not think anybody has a completely clear idea in respect of continuing the ratification process," he said, adding the Irish vote had to be respected the same way the French and Dutch referendums which killed a previous treaty in 2005.

The Civic Democrats have sent the treaty to the Constitutional Court, expected to rule on it around September.

"We have the advantage that we do not have to decide if the ratification process will be interrupted or not, because we have already interrupted it de facto," Topolanek said.

European foreign ministers were meeting in Brussels on Monday to start picking up pieces of the Irish vote, and the overwhelming opinion was that the ratification should continue.

The proposed new treaty would allow more EU decisions to be taken by a majority vote rather than consensus and provide the bloc with a long-term president and a foreign policy chief to give it more clout on the global scene.

"This pressure seems inappropriate to me," he said.

He said the treaty may not be passable in the upper house of parliament, where the Irish rejection bolstered many Civic Democrats who have never been big supporters of the pact.

France and Germany have pressed other countries to go ahead with ratification to keep up momentum during the French presidency of the EU in the second half of this year. The Czechs will hold the rotating presidency for the first half of 2009.