D-8 countries for the celebration of the 10th Anniversary of the organization came together on Saturday in Turkey, Istanbul. 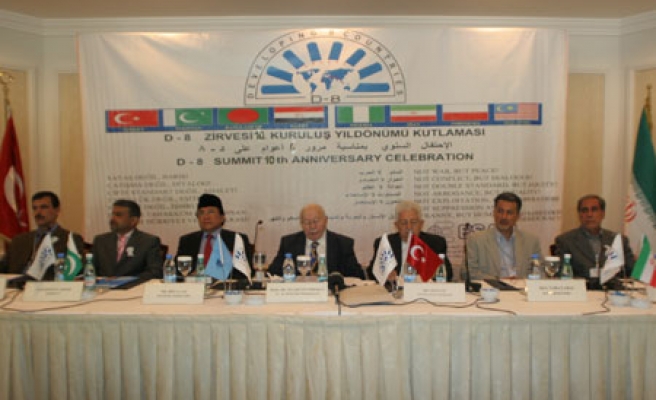 In the summit of the 8 Muslim countries with a population of more than 60 million, Secretary General of the D-8 organization for Economic Cooperation Dr.Dipo Alam pointed out that the Muslim countries are in need of a serious cooperation.

He said; "Although the total trade among the D-8 member countries is 750-800 billion dollars, we have a lot of expectations. In our road map within 10 years 1 trillion dollar trade circulation is planned.

Mr.Alam also said that in Britain even if they hate Islam they love Muslim money, so why not a bank smilar to World Bank be founded in Istanbul?

Secretary General indicated the importance of an Islamic Banking System and also said he had a dream about the energy that would help 900 millions of Muslims living in the D-8 member countries.

Later Necmettin Erbakan, the member founder of the D-8 countries pointed out the reason why the D-8 was established and explained the differences between the G-7 and D-8.Mr. Erbakan also said that a new money currency should be used instead of dollar and euro among the D-8 countries.

D-8 was established to bring wealth and peace for all the oppressed nations under threat and oppression. D-8 will later turn into D-60 and D-160 in which 5 billions of oppressed people are planned to be embraced.

"In order to bring wealth for all those who were oppressed, we need to cooperate better. Visa agreement and similar things are good but not enough. In the political area we need to take very fundemental steps . Just taking the dust on the leaves of the tree is not enough, but want we must to do is to take measurement about the decays of the roots of the tree fundementally." Mr. Erbakan said.