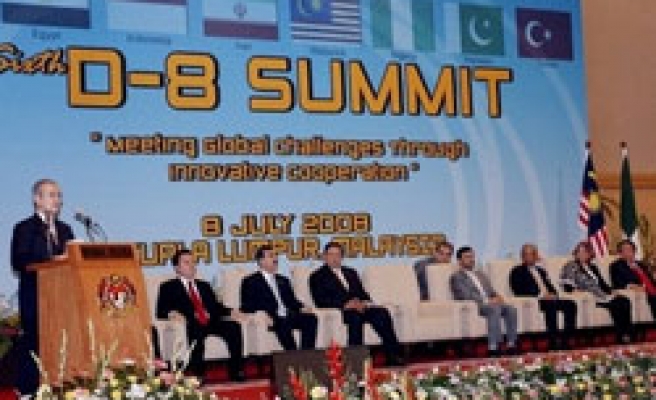 Leaders from the D8 group of developing nations Tuesday adopted an ambitious 10-year blueprint to substantially increase trade between their countries, an official said.

"The leaders have agreed to the roadmap," a Malaysian foreign ministry official involved in the negotiations said.

The trade agreement, to run from 2008 to 2018, details economic and business activities that member nations will pursue over the next decade.

"It is a guideline for a vision and framework for enhancing cooperation. It covers sectors from investment, agriculture, energy, tourism, transportation, banking and finance," the pact said, according to the Malaysian official.

Malaysia's central bank governor Zeti Akhtar Aziz said the D8 nations were now on track to achieve their goal of boosting their intra-grouping trade by 10 to 15 percent by 2018.

"Of course they can achieve it," she told reporters on the sidelines of the summit, adding that the momentum would help their economies offset the impact of a looming global slowdown.

"Early implementation of these agreements will give impetus to promotion of intra-D8 trade, which is at present only 60.5 billion dollars," he said.

"We want to cooperate in areas of food production. We want to increase food supply," Abdullah, who chaired the summit, told a news conference. "We have land, plenty of good and fertile land. We can form joint venture companies to invest."

Formed in 1997, the summit brings together Indonesia, Malaysia, Bangladesh, Pakistan, Iran, Turkey, Egypt and Nigeria _ a market of nearly 1 billion people. The meeting coincides with the Group of Eight summit under way in northern Japan.

The Islamic group also endorsed a 10-year blueprint to raise trade among its members to US$517.5 billion by 2018, or 15-20 percent of their combined total estimated trade. The countries' trade with one another is currently around US$49 billion, or less than 5 percent of their total trade.

Iranian President Mahmoud Ahmadinejad said the global oil crisis was not due to tight supply but an "artificial situation" that was politically motivated.

"The market is full of crude oil ... the law of supply and demand is not functioning," he told reporters. "It is a political issue, so the solution would be a political solution."