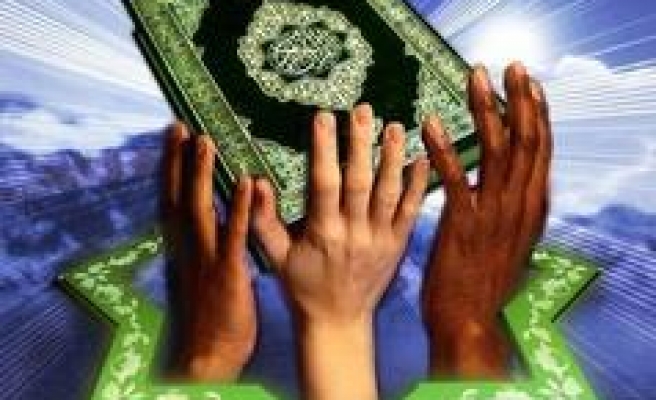 Danish Muslim leaders warned, of grave consequences if copies of the Noble Qur'an were burnt in a rally planned by Danish extremists to protest Muslim anger over cartoons mocking Prophet Muhammad

"All hell will break loose, if those extremists burn the Qur'an," Raed Halil, the head of the European Committee for Defending Prophet Muhammad, told IslamOnline.net over the phone from the Danish capital Copenhagen.

"A female member of a racist party circulated a message calling for burning copies of the Noble Qur'an in Saturday's march," he said.

Halil said the message incited young Danes to burn the Muslim holy book in retaliation for the burning of Danish flags by angry Muslims across the world and the boycotting of Danish products.

The extreme-right grouping Danish Front was to start its own march at 2:00 pm (1300 GMT) in Hilleroed, northeast of Copenhagen.

The 12 cartoons, first published last September by the mass-circulation Jyllands-Posten and then reprinted by several European dailies, have caused an uproar in the Muslim world and drawn a new cultural battle over freedom of speech and respect of religions.

Incensed Muslims have demonstrated against Denmark, burnt its flags and boycotted its products, while several Muslim ambassadors have been recalled in protest.

Danish authorities have tried to reassure Muslims that they would not allow extremist protesters to burn copies of the Noble Qur'an.

"Danish authorities have made clear that burning the Qur'an is a criminal offence whose perpetrator could face four months in prison," prominent Muslim leader Abdel Rahman Abu Laban told IOL, adding that Muslim youths were heading in droves to the rally site to prevent extremists from burning their holy book.

The two Muslim leaders believe the rally is specially untimely.

"It is not the right time to hold such a rally given the current anti-Islam campaigns launched by racists and misleading media," said Halil.

He noted that many Danes still "could not grasp the reasons behind the Muslim uproar," arguing that police should not have given the march the go-ahead.

"With soaring tensions no one can predict how the day would end."

A bunch of racists have already smashed the front window of a restaurant owned by a Muslim, splashed anti-Prophet slurs and incited violence against Muslims.

Police spokesman Flemming Steen Munch expected that the demonstration could well include " anarchists" and "troublemakers."Government Blamed

A demonstration of leftist activists began at 1:00 pm (1200), when around 100 people gathered near the railway station of Hilleroed.

The marchers, many of them clad in black and bearing banners urging people to "Crush the Nazis", turned out to protest the planned anti-Muslim march.

"This affair has gone much too far and it's clearly the fault of the Danish government," said Helle Mortensen, a 17-year-old redhead dressed in black.

"Freedom of expression does not mean to hurt others," she told Agence France-Presse (AFP).

"We say no to the racist and ignorant Danish Front demonstration against Muslims in Denmark and in the world," said Daniel Savi, a local secretary of march organizers SFU, the youth wing of the Socialist People's party.

Another demonstration also planned for Saturday is expected to bring together 2,000 people in Frederiksberg, near Copenhagen, to call for mutual respect and dialogue.

Imams will also organize later in the day a peaceful march in a bid to bridge the gap between the Muslim minority and Danish society.

Muslims in Denmark are estimated at more than 180,000 or around 3 per cent of population, mostly with a Turkish background.

There are three Muslim members of the Danish parliament; Naser Khader, who hails from Syrian roots, Husain Arac, who has a Turkish background, and Pakistan-born Kamal Qurashi.

Islam is Denmark's second largest religion after the Lutheran Protestant Church, which is actively followed by four-fifths of the country's population of 5.3 million.