For the past two weeks users of Google Earth have been able to get an up-close and personal view of the violence unfolding in Sudan's Darfur region. 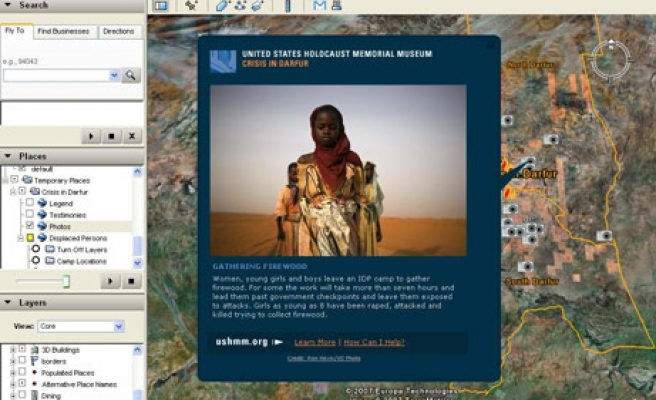 By zooming in on satellite images of Darfur, users can see direct evidence of destroyed villages and hear from survivors through videos, maps, and photos assembled by the U.S. Holocaust Memorial Museum and other groups.

Michael Graham is coordinator of the Washington, D.C., museum's Genocide Prevention Mapping Initiative and the founder of the Crisis in Darfur project.

"This presents a story for people, a visual account that is very personal with photos and testimonies, while at the same time showing the scope of the genocide that is happening in Darfur," Graham said.
More than 200,000 people have been killed in Darfur and a reported 2.5 million have been driven from their homes since ethnically African rebels there took up arms against the Arab-dominated central government in 2003.
Armed militias known as Janjaweed have been accused of burning villages and raping and killing non-Arab civilians, acts the government officially denies involvement with.

On Monday U.S. officials again pushed for a United Nations resolution that would establish a large peacekeeping force in Darfur to protect civilians, a move the Sudanese government has so far rejected.

Graham came up with the idea for the Darfur project after Google launched its virtual-globe software in 2005.

"We had all this information [about Darfur] from human rights groups, the State Department, and others," Graham said.

But it wasn't accessible, because the vast majority of people don't read 80-page human rights reports." By contrast, about 200 million people have downloaded Google Earth since its launch.

"By collecting all the information and adding it on satellite imagery, we could make it visual and put it all into context," Graham said.

The Darfur "layer" is turned on by default when a new user downloads Google Earth, or it can be added in by previous users who download the file from the Holocaust Museum's Web site.

When browsing over Africa, users see the Darfur region light up with flame symbols marking the locations of more than 1,600 destroyed villages and towns.

Zooming in on a location enables the user to view pictures and videos or hear testimonies about what happened there.

One testimony comes from a woman from a village near the town of Garsila, where 30,000 people have been displaced:

"I was with another woman, Aziza, aged 18, who had her stomach slit on the night we were abducted," the anonymous woman is quoted as saying. "She was pregnant and was killed as [the abductors] said, 'It is the child of an enemy.'"

The fact sheets that pop up on Google Earth show that in most villages every structure has been destroyed.

"The attacks are pretty much all the same," said John Heffernan, the genocide mapping project's director. "An aerial assault is followed by a ground assault in which government soldiers work with Janjaweed, loot everything of value, and drive people into the desert deathtrap"

Alex de Waal, a human rights specialist who has worked in Darfur for more than two decades, said the project "massively amplifies the spotlight that was already on Darfur."

"The fact that you can see the level of destruction is astonishing," said de Waal, who is the program director of the Social Science Research Council in New York City.

But the service in its present form may not help prevent further attacks, he said, because the information is not presented in real time.
"Many of the attacks [described] happened two or three years ago," he said.
To track attacks as they happen, the human rights advocacy group Amnesty International, a partner in the Google Earth project, is working on its own Web-based service.

All Eyes on Darfur, which will launch June 1, will use commercial satellite imagery to monitor 13 villages in Darfur and eastern Chad that are at imminent risk of attack.

"Watching these sites in real time will enable us to document any atrocities as they occur," said Ariela Bl