An international meeting on Darfur ended on Monday with promises to support peace-keeping efforts and a political process to stop the violence in western Sudan but with few concrete steps. 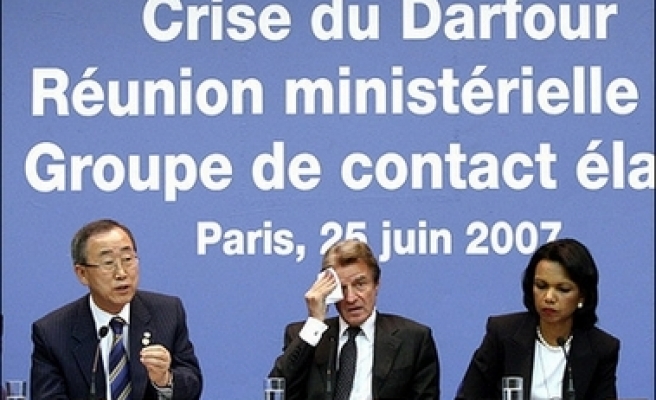 An international meeting on Darfur ended on Monday with promises to support peace-keeping efforts and a political process to stop the violence in western Sudan but with few concrete steps.

The nations at the conference, which included major aid donors, the Group of Eight industrialized nations and Sudan’s ally China, offered few details of exactly how they hoped to end a conflict that has dragged on for more than four years.

‘We really must redouble our efforts, and I think that that was the spirit of today’s conference,’ US Secretary of State Condoleezza Rice told reporters.

She said Sudan must live up to its promise to accept a ‘hybrid’ force of more than 20,000 United Nations and African Union peace-keepers and accused the government in Khartoum of having repeatedly broken its word to end the violence.

Rice also said Khartoum must face ‘consequences’ -- code for new UN sanctions -- if it failed to allow the force in.

French Foreign Minister Bernard Kouchner, who convened the conference, stressed the importance of finding a political solution, saying: ‘There will be no humanitarian solution to this conflict. We were talking about politics.’

Kouchner backed an U.N.-AU mediation initiative that aims to have all parties to the dispute ready to begin talks around August.

China, which buys oil from Sudan and has been reluctant to press it in public over Darfur, said Khartoum was ready to take part.

‘I met with (Sudanese President Omar Hassan) Al Bashir in Sudan. He told me that the Sudanese government actually is ready to come to the negotiating table, at any time, in any place,’ China’s special envoy Liu Guijin told reporters.