A searing heatwave has killed at least 40 people across southern Europe while in Britain torrential rain has killed three people and forced hundreds to flee a creaking dam. 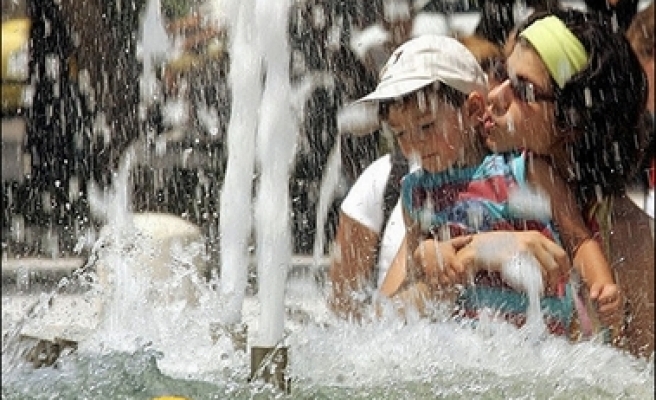 A searing heatwave has killed at least 40 people across southern Europe while in Britain torrential rain has killed three people and forced hundreds to flee a creaking dam.

Twenty-nine deaths have been blamed on the heat in Romania where temperatures on Tuesday hit 45 degrees Celsius (113 Fahrenheit), four in Greece, three in Albania and at least five in Bosnia, Croatia and Turkey.

Record temperatures have been recorded in several countries while violent winds have spread wildfires and stretched emergency services across much of southern Italy.

Bucharest was Europe's hottest capital on Tuesday with temperatures at 45 Celsius (113 Fahrenheit) but a heat alert was sounded for much of the south of the country.

Ambulance services in the capital were beseiged with calls to help people fainting in the street. Fourteen people have died from the heat in the city over the past week, according to authorities who have set up more than 30 first aid tents in Bucharest alone to cope with the casualties.

Police have been handing out water in the street and the health ministry has warned the elderly and those with debilitating illnesses not to go out during the day.

After a winter with much lower than average snowfall and a dry spring, the heatwave has worsened fears that Romania could lose more than half of its normal cereal crop this year because of the weather.

Temperatures were expected to hit 44 Celsius (111 Fahrenheit) in Athens and the government urged the public to save power as electricity consumption hit new highs on Monday. The Greek military has suspended all exercises.

Temperatures in Bulgaria were expected to hit a new record 42 Celsius (107 Fahrenheit) on Tuesday and dozens of heat casualties have also been reported.

Authorities sprayed water on the tram rails to prevent the rails from buckling in the heat.

Authorities in seven Turkish provinces have given two or three days of leave to handicapped or pregnant civil servants, as well as those with chronic health problems because of the heat, Anatolia news agency said.

Temperatures in Croatia are also the highest ever recorded in June, at up to 39 Celsius (102 Fahrenheit).

Three people have died in floods in England and hundreds of people have been evacuated from their homes because torrential threatened to cause a dam to burst. A bridge collapsed in western England.

Authorities in Rotherham, South Yorkshire, told people living near Ulley Dam to leave their homes after receiving a warning that the walls could collapse. A section of the nearby main M1 motorway was also closed.

In nearby Sheffield, Royal Air Force helicopters airlifted people in flooded areas to safety. A 14-year-old boy was swept to his death in a swollen river and a 68-year-old man was killed as he crossed a flooded road.

In Hull, on the east coast, a man drowned after becoming trapped up to his neck in a drain on a flooded street. Emergency services battled to save the man, but could not free him as waters rose.

A 13 metre (40-feet) section of a bridge was washed away in Ludlow, central England, by a swollen river, severing a gas main and causing a number of minor explosions.

Forecasters have said that some parts of Britain had an entire month's worth of rain in just a few hours, just a week after similar downpours caused disruption.