Cyclone Gonu, which tore through Oman this week before veering towards Iran, killed at least 32 people and left another 30 missing in the Gulf sultanate, police said Friday 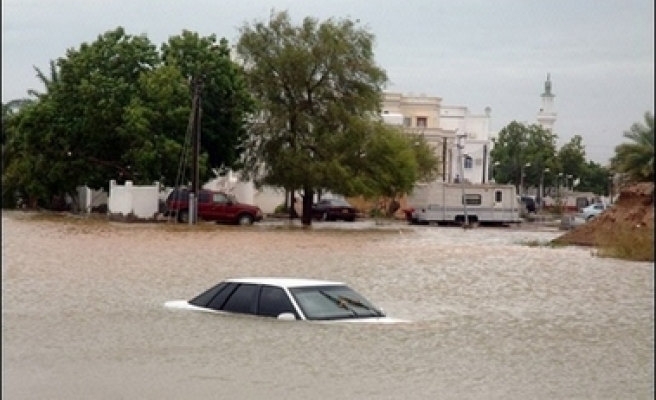 Cyclone Gonu, which tore through Oman this week before veering towards Iran, killed at least 32 people and left another 30 missing in the Gulf sultanate, police said Friday

‘The toll from cyclone Gonu has reached 32 dead ... and 30 missing,’ a police spokesman said in a statement published by the official Ona news agency.

Oman was lashed by driving rain and heavy winds on Wednesday as thousands of people were evacuated in the face of the storm.

Television broadcast footage of overturned cars and flooded roads on the battered east coast, and a police spokesman said officers even had to use jet skis in some areas of the seaside capital.

As the sunshine returned to the normally dry sultanate on Thursday, residents ventured into the open to find trees and road signs uprooted and debris washed up along the shore.

Although the storm had raised fears about oil shipments in the Strait of Hormuz, through which about one quarter of the world’s crude supplies pass, officials said shipping had not been affected.

In neighbouring Iran, the storm lost force as it drove inland after hitting the southern coast late on Wednesday, killing two people and forcing some 40,000 to flee.

By late Thursday, most of those who had been evacuated from coastal areas in the southern Sistan-Baluchestan and Hormozgan provinces to higher ground had returned to their homes, state television said.

Two people in a truck loaded with emergency supplies were killed in Hormozgan’s southern port of Bandar-e Jask when a river overflowed because of the heavy rains, causing the vehicle to overturn, relief officials said. Last Mod: 08 Haziran 2007, 17:28
Add Comment