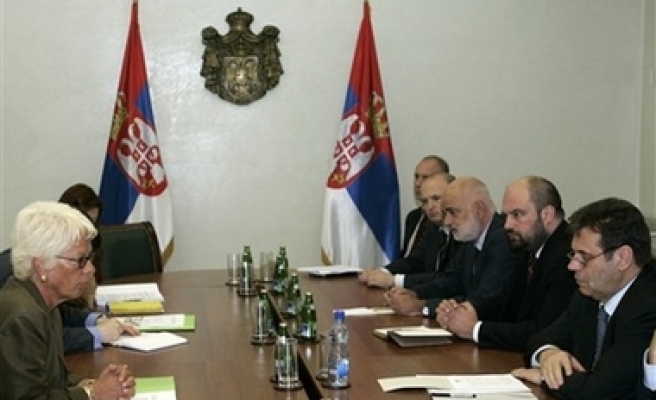 She on Monday held talks with prime minister Vojislav Kostunica and other senior officials centred on Serbia's cooperation in arresting the fugitives, who include wartime Bosnian Serb leader Radovan Karadzic and his military commander, Radovan Karadzic.

There were no press statements following Del Ponte’s hour long meeting with Kostunica, but her spokeswoman Olga Kavran said Del Ponte would assess progress in Belgrade’s cooperation with the Hague tribunal before making a report to the United Nations Security Council later this month.

The European Union broke off pre-entry talks with Serbia a year ago due to a lack of cooperation with the UN tribunal. The resumption of talks depends on Del Ponte's report.

Serbian officials have voiced optimism that the report would be positive, because last week another fugitive, former Bosnian Serb general Zdravko Tolimir was handed to the court for trial.

Del Ponte, who leaves her post in September, is also scheduled to meet with president Boris Tadic, foreign minister Vuk Jeremic and officials in charge of security agencies and those tasked with bringing cooperation with the tribunal to a successful conclusion.

Kavran said that the prosecutor was ready to cooperate with the new Serbian government formed last month and “its effort to establish full cooperation with the tribunal, which includes the arrest and handing over of Ratko Mladic, Radovan Karadzic and other fugitives." Last Mod: 04 Haziran 2007, 19:50
Add Comment