A historic veto showdown assured, Democratic leaders agreed Monday on legislation that requires the first U.S. combat troops to be withdrawn from Iraq by Oct. 1 with a goal of a complete pullout six months later. 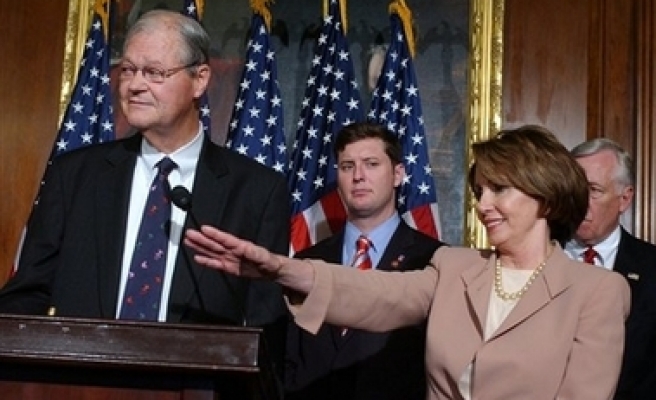 "No more will Congress turn a blind eye to the Bush administration's incompetence and dishonesty," Senate Majority Leader Harry Reid said in a speech in which he accused the president of living in a state of denial about events in Iraq more than four years after the U.S.-led invasion.

Bush, confident of enough votes to sustain his veto, was unambiguous in his response. "I will strongly reject an artificial timetable (for) withdrawal and/or Washington politicians trying to tell those who wear the uniform how to do their job," he told reporters in the Oval Office as he met with his top Iraq commander, Gen. David Petraeus.

Taken together, the day's events marked the quickening of a confrontation that has been building since Democrats took control of Congress in January and promised to change policy in a war has claimed the lives of more than 3,200 U.S. troops.

Congressional negotiators for the House and Senate met in late afternoon and ratified the details of the legislation. Republicans voiced opposition, but made no attempt to delay or even seek changes. "We all know this bill is going nowhere fast," said Rep. Jerry Lewis, R-Calif., referring to the veto threat.

"Congress is preparing to deliver a message of surrender just as General Petraeus arrives in Washington this week to brief the commander in chief and members of Congress on the war," he added.

The bill includes more than $90 billion for the wars in Iraq and Afghanistan, the withdrawal timetable that Bush finds objectionable and billions of dollars in domestic spending that he also has threatened to veto. Overall, the bill totals $124.2 billion.

Democratic aides said House Speaker Nancy Pelosi and Reid hope to clear the measure through both houses by Friday and send it to Bush by early next week for his expected veto. The Democratic leaders have not said whether they will attempt to override the veto in what would be a largely symbolic act given the number of Republicans who have said they will back the president.

There is far less certainty about the next steps in the historic wartime confrontation between Congress and commander in chief. Reid and other Democrats have said repeatedly they will not leave the troops without the funds they need, but they have not said whether they will first force Bush to veto at least one more bill before sending him legislation he finds acceptable.

He likened the president to Lyndon Johnson, saying the former president ordered troop escalations in Vietnam in an attempt "to save his political legacy," only to watch U.S. casualties climb steadily.

Bush, he said, "is the only person who fails to face this war's reality - and that failure is devastating not just for Iraq's future, but for ours."

Reid had made similar comments at a White House meeting last week among Bush and top lawmakers, and the president dismissed the comparison with Johnson, according to several participants in the session. This time, Dana Perino, the president's spokeswoman fired back. She said it was Reid who was ignoring reality, not the president.

As outlined by Democratic officials, the emerging legislation would require the withdrawal of U.S. forces to begin by Oct. 1, even earlier if Bush cannot certify that the Iraqi government is making progress in disarming militias, reducing sectarian violence and forging political compromises.

Another provision in the measure would withhold about $850 million in foreign aid funds from the Iraqis if the government does not meet those standards.

Also, the Pentagon would be required to adhere to certain standards for the training and equipping of units sent to Iraq, and for their rest at home between deployments. Bush could waive the guidelines if necessary. Democrats assume he would, but want him on record as doing so.

Under the nonbinding timeline, all combat troops would be withdrawn by April 1, 2008.

After that date, U.S. forces would have a redefined and restricted mission of protecting U.S. personnel and facilities, engaging in counterterrorism activities against al-Qaida and other similar organizations and training and equipping Iraqi forces.

Democrats jettisoned some of the additional domestic spending that Bush has held up to ridicule, including funds for spinach growers and peanut farmers. But Reid, Pelosi and others decided to include money to help farmers hit by natural disasters as well as the victims of Hurricane Katrina.

Reid's speech blended criticism of Bush, an appeal for patience to the anti-war voters who last fall gave Democrats control, and an attempt to shape the post-veto debate.

"I understand the restlessness that some feel. Many who voted for change in November anticipated dramatic and immediate results in January," he said.

"But like it or not, George W. Bush is still the commander in chief - and this is his war," Reid said.

Looking beyond Bush's expected veto, he said, "If the president disagrees, let him come to us with an alternative. Instead of sending us back to square one with a veto, some tough talk and nothing more, let him come to the table in the spirit of bipartisanship that Americans demand and deserve."