Thousands of deported Afghan men are destined this week to trudge across the Iranian border into their impoverished homeland — many of them determined to sneak back into Iran at the first opportunity. 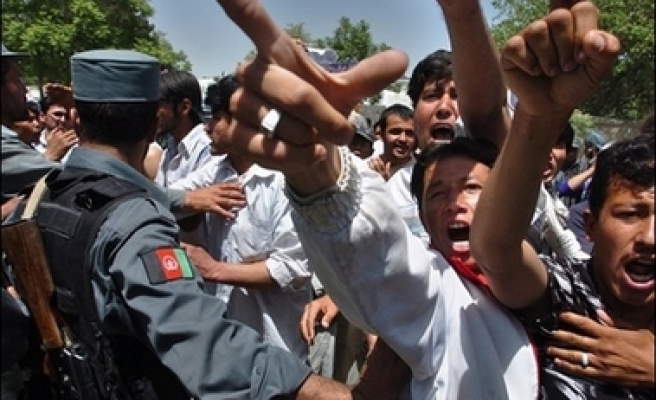 Thousands of deported Afghan men are destined this week to trudge across the Iranian border into their impoverished homeland — many of them determined to sneak back into Iran at the first opportunity.

Despite Afghanistan’s appeals to stem the tide, Iran keeps deporting illegal Afghan workers through the desert border post of Islam Qala, where they cross on foot in single file and are welcomed home by legless beggars and street children.

Each man carries his few belongings in a sports bag, a plastic sack or tied up in a sheet, whatever he had with him when he was arrested. Some have only the clothes they are wearing.

“I want to go back,” 20-year-old Zia Akhlaqi said after crossing the border last week, clutching a blue, shoebox-sized bag in one hand and pointing back toward Iran with the other.

“My money is back there.”

More than 100,000 Afghans, many of them illegal workers, have been rounded up and bused back to their homeland since April 21, when Tehran launched a major campaign to return illegal Afghan workers, estimated to number more than 1 million.

The strain is starting to tell, particularly in Herat, Afghanistan’s second-largest city, less than two hours’ drive from Islam Qala along a new, sealed road.

The Herat police chief said on Wednesday that crime had picked up since the waves of newly jobless young men washed into the city of 3 million people two months ago.

“Joblessness is the mother of every crime,” Mohammad Shafiq Fazli said wearily at Herat police headquarters, though he insisted it was not spiralling out of control.

In the capital, Kabul, the problem is also felt: the foreign minister and refugees minister have been censured by parliament for their handling of the crisis, though the government had pleaded with Iran not to flood the country with returnees.

‘I am completely alone’

At the dusty, windswept border post, young men pour off Iranian buses, well aware no jobs and in some cases no family await on the other side.

Hundreds of voluntary returnees also arrive here, having chosen to return before Iranian police catch up with them. Unlike the deportees, they have been given a chance to collect their possessions and arrive bearing stereos and kitchen appliances.

Children work as porters on the Afghan side, offering to carry their loads in wheel barrows to a traffic jam of taxi touts offering to take the returnees into Herat.

The beggars also focus most of their attention on the voluntary returnees, knowing the deportees have next to nothing.

“I am completely alone,” 16-year-old Safiullah said through an interpreter after crossing the border.

He said he had gone to Iran last year in search of work just as Afghanistan took a violent turn for the worse. On Wednesday, he was back, having been arrested at a Tehran building site.

Some older men said they had worked for many years in Iran and had left behind families and savings, both at the mercy of landlords. Illegal workers have no bank accounts, so they leave their money with Iranian landlords for safekeeping, they said.

Zia said he left behind a 20-day-old baby girl with his wife and around $1,100 in savings. Another man said he had been arrested while being treated for kidney disease in an Iranian hospital; another said he had left $3,000 with his landlord.

It wasn’t always such a sorry procession at Islam Qala.

Three years ago, thousands of Afghans came home willingly across this border every day, lured back by the promise of better times. After Taliban fallen from power in 2001 and foreign aid donors were pouring in billions of dollars.

The United Nations built a huge handling centre at Islam Qala for voluntary returnees. The size of about six football fields, it could accommodate dozens of buses and process thousands of people at a time. Now it feels empty.