Detention of generals marks end of impunity for coups

Turkey's military has staged three coups, but toppling a democratically elected government has never been treated as a constitutional crime subject to judicial prosecution. 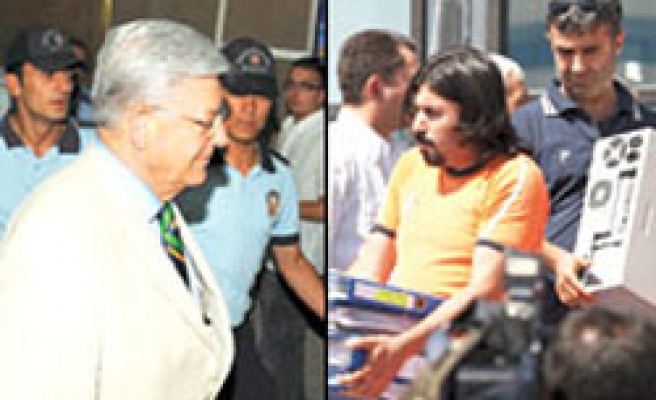 Turkey's military has staged three coups since 1960, but toppling a democratically elected government has never been treated as a constitutional crime subject to judicial prosecution.

At least this was the case until Tuesday, when a former general who was already revealed to have been involved in plans to stage coups against the government in 2004 and 2005 was detained as part of a year-long operation into the shadowy Ergenekon network.

On Tuesday, 23 people, including three former army commanders, a journalist and the leader of a business group, were detained in operations in the cities of Ankara, İstanbul, Antalya, Erzurum and Trabzon as part of an investigation into a powerful and illegal organization suspected of plotting to overthrow the Justice and Development Party (AK Party) government.

Turkey, which survived three coups d'état in 1960, 1971 and 1980 and an unarmed military "intervention" in 1997, in addition to a large number of minor incidents where the military's powerful presence has played, overtly or covertly, a key role in defining major policy decisions, has not investigated, tried or taken any other legal action against a single high-ranking general for involvement in engineering military takeovers. In fact, the general of the last full-fledged coup in Turkey is currently enjoying a retirement of luxury in the holiday resort town of Marmaris, where he has taken up painting as a hobby. A few daring prosecutors who set out on a bid to prosecute him and his comrades-in-coup ended up being disbarred. Meanwhile, the deputy chief prosecutor of Istanbul said Ergenekon was referred to in the indictment as a 'terrorist organization.' He also said the indictment was already completed. The 2,500 page document would be submitted to the court next week, he told the press. "A first happened in Turkey. A step has been taken to give the hope that the 'untouchables' can also be touched," wrote Taraf daily's Yasemin Çongar in her column. "Hopes arose that things may not proceed the way they used to."

The detainees include retired Gen. Şener Eruygur, former head of the paramilitary gendarmerie forces and currently the head of the secularist Atatürkist Thought Association (ADD), named after the founder of the Turkish Republic, Mustafa Kemal Atatürk.

Eruygur was a key figure in diaries of former Adm. Özden Örnek which revealed plans by generals to stage coups against the AK Party government in 2004 and 2005.

Former Gendarmerie General Command Intelligence Department head Levent Ersöz, who was reported to be in Russia, and former AK Party deputy Turhan Çömez, who is currently in London, are also wanted as suspects in the Ergenekon case.

The military has not raised any public objections to the Ergenekon operation despite the involvement of former generals, a sign that the military's command line is opposed to plans for a coup and that it is ready to cooperate with the civilian judiciary when it takes action against those members of the military who were trying to engineer a coup.

The detentions came only days after a secret meeting between Prime Minister Recep Tayyip Erdoğan and Land Forces Commander Gen. İlker Başbuğ, triggering comments that the two had discussed the upcoming sweep and that Başbuğ, who is widely expected to become the new chief of general staff in late August, had approved the operation targeting the former generals involved in plotting a coup.

Başbuğ yesterday in clear terms rejected this interpretation of his meeting with Erdoğan and said the Ergenekon operation had not been discussed in the talks with Erdoğan. He did not, however, express any opposition to the operation, like the main opposition Republican People's Party (CHP) did. Hours later, the Prime Ministry also made a statement denying that the Ergenekon detentions were on the agenda of the meeting between Erdoğan and Başbuğ on June 24 and said such interpretations appeared to be "intentional."

"Turkey is passing through difficult days. We all have act with more common sense, more carefully and more responsibly," Başbuğ told reporters.

The fact that some of the detentions took place in military compounds was also widely seen as a nod by the military to an operation against coup plotters. In a statement released yesterday, the military denied the claim that the police entered the compound and said the detentions were carried out by military personnel acting under a request from the public prosecutor.

TOBB: Crackdown against us all

The secularist opposition and some media commentators claimed the detentions were reminiscent of 1980, when the military brutally suppressed the opponents following a coup, and urged prosecutors to present their indictments in the Ergenekon case, which has been under way for a year now.

In one of the strongest reactions against the raids, Rifat Hisarcıklıoğlu, the powerful chairman of the Turkish Union of Chambers and Commodity Exchanges (TOBB), said, "The raids yesterday were reminiscent of previous coups and are not acceptable." He was delivering a speech at the Ankara Chamber of Commerce (ATO), whose chairman, Sinan Aygün, was also detained.

Chairmen of other chambers of commerce had varied opinions. Mehmet Kaya, head of the Diyarbakır Chamber of Commerce and Industry said: "Everybody should respect the law in Turkey. If they are guilty, they should be punished accordingly."

"We are sorry that a colleague of ours was detained," said ?enol Da?tan, head of the Yozgat Chamber of Commerce and Industry. "We are irritated if and when civil society organizations are associated with such plans. Coup periods are over."

"This person was voted in by thousands of merchants. He would come to testify when called. It was irritating how he was detained," said Süleyman Baydilli, head of the Aksaray Chamber of Commerce and Industry.

"We know Sinan Aygün I don't think he was part of this. It would have been better to call him to testify instead of detention. I need to see the indictment before I can speak more clearly. I think it is wrong that the government is being associated with the operation. The process is being carried out by republican prosecutors," said Osman Yıldırım, head of the Sivas Chamber of Commerce.

However, professors of constitutional law were much harsher in their criticism of Hisarcıklıoğlu and similar commentators. Professor of constitutional law Mustafa Kamalak said: "In these criticisms, not accepting the will of the nation makes itself strongly felt. The prosecutor and the security forces have done what the law necessitates," Kamalak said, dismissing arguments that the detentions were unacceptable.

Levent Köker, another professor of constitutional law, agreed that the detentions were in compliance with the law. "They are only criticizing because of their political standing," he noted.

Cumhuriyet's Balbay said he would not make a statement and would exercise his right to remain silent, his lawyer told reporters on Wednesday. "I was not informed about what the tangible accusations and the related information and documents regarding the accusations are. I don't know why I was taken into custody and detained under these circumstances," said Balbay's written statement, which was read by his lawyer.

Some have also questioned the timing of the raids as they came shortly before an election. The chief prosecutor also wants Erdoğan and other top figures banned from party politics for five years. The AK Party, which won a sweeping re-election last year, will present its defense in court today.

More than 70 people, including retired army officers, lawyers and politicians have been arrested over the past year for suspected links to Ergenekon, which is named after a valley in Turkish nationalist mythology.

The Ergenekon scandal has put the spotlight on Turkey's deep state, a term for ultranationalists in the security forces and state bureaucracy who are ready to bend the law or act in opposition to the government in pursuit of their political aims.

The military, which has repeatedly criticized the government and considers itself the guardian of Turkey's secular system, has denied any links to the group.

Police officers who raided Eruygur's offıce reportedly seized an action plan detailing a coup. According to the plan, surveys would have been conducted whose results would show a deteriorating economy. The results would then be highly publicized. Political assassinations would have been carried out from the beginning of July 2008. A 30-member team which included former members of JITEM (a de facto intelligence organization of the gendarmerie) would have been established to carry out these assassinations. These attacks would have mainly targeted members of the judiciary and would have been immediately followed by simultaneous "Stand up for your judiciary" demonstrations across 20 provinces on July 6. Tolon and leading ultranationalist figures would have participated in demonstration to have been held in the southeastern province of Gaziantep in which clashes with the police were to have arisen. In this way, the society would have been dragged into an environment of civil strife and the way for a coup would have been opened.

Retired Gen. Şener Eruygur, who was detained on Tuesday on charges of involvement in plotting a coup against the Justice and Development Party (AK Party) government, had a secret office inside an orduevi -- a recreational army facility -- located in İstanbul's Fenerbahçe district, a news report printed on the Gazeteport news site said. In this office, which was searched by the police on Tuesday, a number of highly classified documents were acquired, the story said.

According to the story, nothing was found in Eruygur's family home during searches there on Tuesday. Col. Fikri Karadağ, Maj. Zekeriya Öztürk and Capt. Muzaffer Tekin, retired officers who were also arrested in the Ergenekon operation, frequently used the Fenerbahçe orduevi as a meeting area, investigators have discovered.

Scandalous past of a retired army general

Gen. Levent Ersöz, a retired military officer who is being sought over alleged membership in the Ergenekon organization, has engaged in suspicious dealings in his past, reports on Wednesday said.

Ersöz, who is now believed to be in Russia, is frequently mentioned in a diary by former Navy Commander Adm. Özden Örnek. The admiral wrote in a journal entry on Dec. 19, 2003 about Ersöz, who was the chief of the Intelligence Command of the Gendarmerie: "[Ersöz] gave me a special briefing about their activities. They have devised and begun implementation of every idea that can work to weaken the AK Party government within the bounds of democratic rules. I listened in awe. I shared some of my views."