The Bush administration has turned America from a model democracy into a totalitarian country reminiscent of Hitler's Nazi Germany, Mussolini's fascist Italy and Communist China by implementing a simple time-tested 10-step recipe, The Guardian reported on 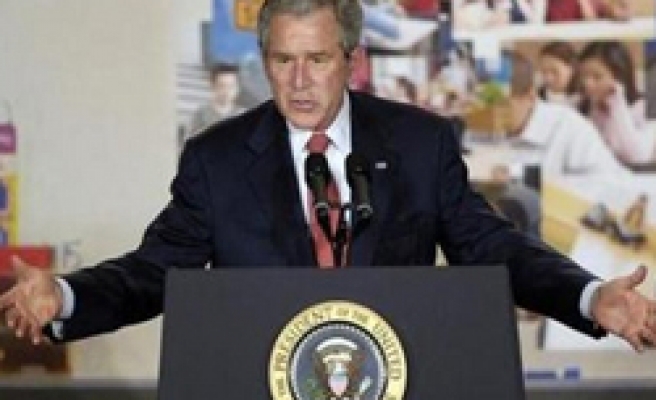 "It is very difficult and arduous to create and sustain a democracy - but history shows that closing one down is much simpler. You simply have to be willing to take the 10 steps," said the British daily in a report titled "Fascist America, in 10 Easy Steps."

It stressed that the Bush administration has excelled in the first step, invoking "Islamic terrorism" as an internal and external enemy following the 9/11 attacks.

Bush used the 9/11 fear factor many times and his reelection in 2004 was largely attributed to the existence of Osama Bin Laden and his ghostly Al-Qaeda group.

The Guardian said the Americans found themselves in an open-ended war without national boundaries unlike other wars, which had an endpoint.

It likened invoking "Islamic terrorism" as a threat to Hitler's invocation of a Communist threat to the nation's security.

The daily also drew a simple comparison between Bush's reaction to terror and that of European countries also hit by terrorist attacks.

"The language used to convey the nature of the threat is different in a country such as Spain."

While the Spaniards recognize they face a grave security threat, the Americans think they are threatened with the end of civilization, it noted.

The Guardian noted that a dictatorship has no room for opposition.

A dictator usually cracks down hard on opposition leaders by threatening their professional careers or simply accusing them of "treason" and "espionage."

It underlined that the Bush administration is threatening civil servants, artists and academics with job loss if they don't toe the line.

"Bush supporters in state legislatures in several states put pressure on regents at state universities to penalize or fire academics who have been critical of the administration," it said.

"As for civil servants, the Bush administration has derailed the career of one military lawyer who spoke up for fair trials for detainees."

Professor Paul Gilroy, the chair of African American studies in Yale university, told the Guardian in 2006 that federal anti-terror sheriffs were watching and paying students to tape professors and teachers speaking out against Bush's foreign policy.

The Fascist America, in 10 Easy Steps" article also notes that the Military Commissions Act of 2006 gave Bush the power to call any US citizen an "enemy combatant."

It said under such powers, the definition of "spy" and "traitor" became too loose.

Muzzling the free press is also one of the dictatorship's bedrock.

The American Committee to Protect Journalists says arrests of US journalists are at an all-time high nowadays.

The Guardian cited the recent arrest and one-year imprisonment of blogger Josh Wolf for refusing to turn over video of an anti-war demonstration to authorities.

Authorities had also harassed and tried to criminalize reporter Greg Palast when he and a TV producer were filming victims of Hurricane Katrina in Louisiana.

Both CBS and the Associated Press had staff seized in Iraq by the US military and taken to notorious prisons for trying to convey to the Americans the situation on the grounds without White House cosmetics.

The Guardian wondered what kind of images does a police state conjure up.

The answer is six images: spying on citizens and civil societies, engaging in arbitrary detentions, harassing activists and critics, creating a team of thugs and freezing law and order.

"It became clear to ordinary Americans that they, too, could be under state scrutiny," said the British daily.

The New York Times revealed last month that undercover New York Police Department officers, posing as sympathizers and activists, have chronicled countless of intelligence digests and field reports about civil societies and anti-war groups in the US and even Canada and Europe.

Again in the wake of the 9/11 attacks, Bush authorized spying on the country's main communications systems without court-approved warrants.

For the past five years, the administration has been taping into the Passenger Name Record database, created by global travel reservation services.

It added that years after 9/11 have proved a "bonanza" for America's security contractors, who did jobs — at home and abroad like in Iraq — that were supposedly to be done by police or the military.

The daily insisted that a "security contractor" is a euphemized term for a "thug" or "mercenary."

Thugs at home, it said, were reported in 2000 when groups of angry young Republican men, dressed in identical shirts and trousers, menaced poll workers counting the votes in Florida.

The Guardian also said that the John Warner Defense Authorization Act of 2007 gave the president new powers to suspend existing laws, for instance, in emergency cases like natural disaster, a disease outbreak, terrorist attack or any "other condition."

In its analogy between dictator country and Bush's America, the British daily said a dictatorship must have it own "gulags," the Soviet detention centers notorious for torturing political prisoners and suspects.

"America certainly has its gulag now (where) detainees are abused, kept indefinitely without trial and without access to the due process of the law," it said.

The paper cited secret CIA prisons, the notorious Abu Ghraib in Iraq, prisons in Afghanistan and Guantanamo prison, once branded by Amnesty International as the "gulag of our times."

Bush, the Guardian added, has also followed in the footsteps of fascist Mussolini and Stalin, setting up military tribunals for Guantanamo prisoners.

Arbitrary arrests and indiscriminate security searches are also typical of a dictator.

The British paper said Americans and foreigners in the US should watch their acts and words under the Bush administration.

"Even if we turn out to be completely innocent of what he has accused us of doing, he has the power to have us seized as we are changing planes at Newark tomorrow, or have us taken with a knock on the door; ship you or me to a navy brig; and keep you or me in isolation, possibly for months, while awaiting trial."

In 2004, America's Transportation Security Administration confirmed that it had a list of passengers who were targeted for security searches.

Those on the list surprisingly included liberal Senator Edward Kennedy along with peace activists in San Francisco, a member of Venezuela's government and thousands of ordinary US citizens.

When he tried to wonder why he was on the list, Professor Walter F Murphy, one of the foremost constitutional scholars in the US, got a shock answer from the airline employee.

"Have you been in any peace marches?" asked the employee.

"I explained," said Murphy, "that I had not so marched but had, in September 2006, given a lecture at Princeton, televised and put on the web, highly critical of George Bush for his many violations of the constitution."