Officials found the fossil of a giant dinosaur jawbone while investigating a suspicious package on a bus in the mountains of Peru on Tuesday. 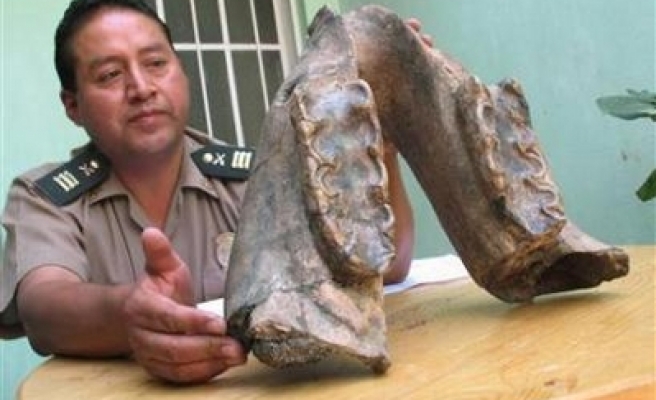 The fossil, weighing some 19 pounds (8.5 kilos), was found in the cargo hold of the bus, which was headed for the capital of Lima, and had been sent on the bus company's package service.

'They began to check the package because it didn't have anything to indicate what was inside. They were worried about its weight, opened it and found the fossil,' said Kleber Jimenez, a local police officer.

Peru has struggled for years to combat trafficking of fossils and artifacts. Recently Yale University in the United States agreed to return thousands of pieces taken from the ancient Inca citadel of Machu Picchu to Peru.

'The jawbone that was found could be from a triceratops, even though dinosaurs like that have never been found in southern Peru,' Pablo de la Vera Cruz, an archeologist at the National University in Arequipa in southern Peru, said after examining police photos.

The three-horned, bony triceratops roamed some 65 to 70 million years ago. Fossils of the creatures have previously been found mainly in the western part of North America.