Officials were still unable to say how many people were stuck on board the ship, but fears are growing of a mass grave below the waves. 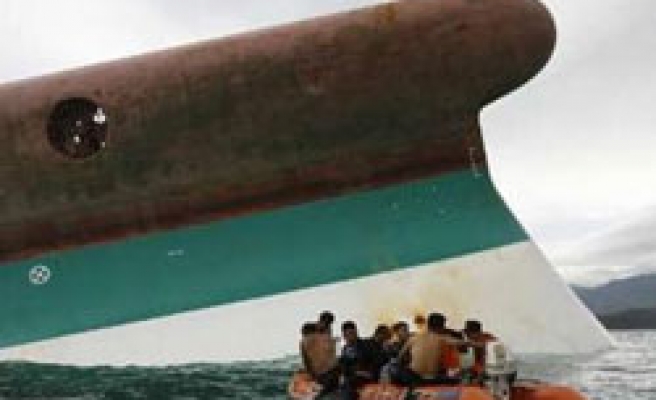 Divers found bodies floating inside a ferry that sank in the central Philippines with over 800 people on board, a navy spokesman said on Tuesday, confirming grim fears.

The corpses, wearing lifevests and floating head up, were trapped inside the Princess of the Stars when it capsized and turned over in waves as big as houses off the coast of Sibuyan island during Saturday's typhoon.

Officials were still unable to say how many people were stuck on board the ship, but fears are growing of a mass grave below the waves.

"When they tried to enter the vessel they saw several corpses floating in the airpocket," Lieutenant Colonel Edgard Arevalo said of the divers.

Conditions below were murky.

Arevalo said the coast guard planned to bore a hole inside the 23,824 tonne vessel to retrieve the corpses.

Drilling will have to be done cautiously because the ship, which is resting upside down with only the tip of its bow above water, is estimated to have around 100,000 litres of bunker fuel still on board.

A helicopter from U.S. military ship, the USNS Stockham, spotted 12 corpses floating near Masbate island, at least 70 km east of Sibuyan, local radio reported. It was unclear if they were from the Princess of the Stars.

So far only around 33 people have been found alive out of 864 passengers and crew on board.

Relatives waiting in Manila and the central city of Cebu, where the ferry was meant to dock, are worried they won't recover the bodies of their loved ones.

"We want to see our relatives, even if they are dead already," said Rey Gilbuena, who was waiting at port in the Philippine capital for news of 18 relatives on board.

Some swollen, decomposing corpses that have washed up on local islands have been immediately buried.

Typhoon Fengshen, which has weakened to a tropical storm over the South China Sea, pounded the Philippines at the weekend with gusts of up to 195 kph (120 mph).

Fengshen was expected to bring more rain to already flood-ravaged southern and eastern China as it makes landfall near Shantou in Guangdong province on Wednesday, according to the tropical storm monitoring website Tropical Storm Risk (http://tsr.mssl.ucl.ac.uk).

Aside from the ferry disaster, possibly the worst in the Philippines in over 20 years, at least 155 people were killed, largely by drowning, in a torrent of floods in the south and centre of the archipelago, according to the Red Cross.

The sixth typhoon to hit the archipelago this year badly damaged the country's already shoddy infrastructure, washing away thousands of homes as well as roads and bridges.

In Iloilo, the province worst hit by Fengshen, over 200,000 people were forced to evacuate, the Red Cross said.

Complicating ferry rescue efforts, the coast guard admitted on Tuesday that another vessel, a cargo ship, had also sank in the vicinity of the Princess of the Stars on Saturday.

Shipping tragedies are a common event in the Philippines, an archipelago of over 7,000 islands where safety rules are poorly implemented and substandard vessels ply dangerous waters.

President Gloria Macapagal Arroyo, on a state visit to the United States, has ordered a review of maritime regulations and authorities have suspended the operations of the ferry's owner, Sulpicio Lines, which has been involved in three other major shipping disasters in the past 21 years.

In 1987, the Sulpicio-owned Dona Paz ferry collided with an oil tanker killing more than 4,000 people in the world's worst peacetime sea tragedy.