Combining a low dose of a targeted cancer-fighter with an anti-inflammatory drug reduces the risk of recurring colorectal polyps, an early sign of colon cancer, by as much as 95 percent, researchers said on Monday. 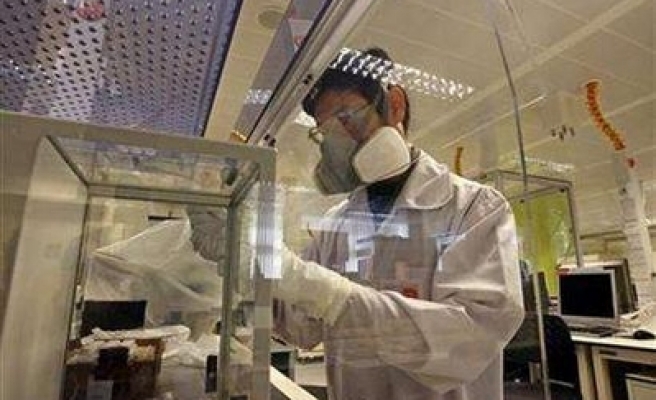 A study conducted by the University of California, Irvine, also found that the drug combination was much less toxic than chemotherapy.

"I think we are on track to develop a medical means to prevent colon cancer," in people at high risk of developing the disease, said Dr. Frank Meyskens, director of the university's cancer center. He said earlier efforts to develop a preventive treatment were thwarted by the fact that available therapies caused too much toxicity.

Meyskens lead a study in which 375 patients with at least one previous colorectal polyp, also known as adenomas, were treated with either a combination of one-time cancer drug DFMO (difluoromethylornithine) and sulindac, a non-steroidal anti-inflammatory drug (NSAID), or placebo.

The results, presented at a meeting of the American Association for Cancer Research in San Diego, were so encouraging that the study was stopped early.

After three years, the overall risk of recurrent adenoma was 12.3 percent in treated patients, compared with 41.1 percent for patients in the placebo group, or a 70 percent risk reduction.

For patients with more than one previous polyp, 0.7 percent of treated patients had a recurrence, compared with 13.2 percent of placebo patients -- a 95 percent reduction.

DFMO is the basis of the drug eflornithine, which was initially developed as a cancer medication, but is now used to treat African sleeping sickness. A cream formulation of eflornithine is marketed as a hair removal agent under the brand name Vaniqa.

Sulindac is sold by Merck & Co Ltd under the brand name Clinoril as a treatment for arthritis and other inflammatory conditions.

Meyskens said larger trials will be needed to assess the risk of cardiovascular and other adverse side effects, as well as to determine whether the incidence of actual colorectal cancer can be reduced in either patients with low stage prior colorectal cancers or in very high risk individuals.

Chronic use of other NSAIDs, such as Merck's Vioxx, has been linked to an increased risk of heart attack and stroke.

Sulindac is associated with liver toxicity.

A separate large study presented at the conference showed that Pfizer Inc's Cox-2 inhibitor Celebrex, or celecoxib, significantly reduced the risk of colon polyps during a trial that was cut short after too many patients developed cardiovascular problems.

"For patients without major cardiovascular risk factors, celecoxib at low doses protects against high-risk lesions that can lead to colon cancer," said Dr. Monica Bertagnolli, associate professor of surgery at the Brigham and Women's Hospital, and the lead researcher on the Celebrex study.

Meyskens said the combination therapy was likely to eventually be used in people at high risk of colon cancer, including those discovered to have advanced adenomas, as well as patients diagnosed with low-stage colon cancer who have had their disease cured.

"About 30 to 35 percent of those patients will develop another colon cancer," he said.

According to the American Cancer Society, colon cancer will kill 52,000 people this year in the United States alone.
Last Mod: 15 Nisan 2008, 13:55
Add Comment