Dutch Muslims Better off Without Hirsi

Almost a year after controversial Somali-born Ayaan Hirsi left the Netherlands following a scandal over lying to authorities to win asylum, Muslim women in the European country feel they are better off. 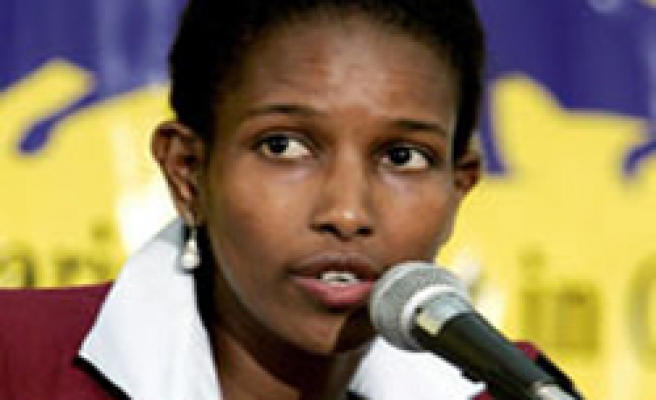 Almost a year after controversial Somali-born Ayaan Hirsi left the Netherlands following a scandal over lying to authorities to win asylum, Muslim women in the European country feel they are better off.
"I am glad that Ayaan Hirsi Ali is gone," Nermin Altintas, who runs an education center for migrant women, told Reuters on Wednesday, April 25.

"Now the tone has softened, it has become less extreme and tensions have eased."

Hirsi left the Netherland for the US after admitting she lied about her name and refuge status on arrival in 1992 to gain asylum in the European country.

The Somali-born MP built her popularity on odious attacks on Islam including her controversial two-part documentary "Submission" about Islam's alleged oppression of women.

The documentary, blasted as "extremely insulting" by the one million Muslim minority, led to the November 2004 killing of its director Theo Van Gogh.

The crime, committed by a Dutch man of Moroccan origin, was vehemently condemned by the vast majority of the minority.

Many accuse Hirsi of fueling racial tension in the Netherlands and diverting attention away from those trying to promote Muslim integration into society.

"Her methods were such that rather than attracting Muslim women she pushed them away," said Suzan Yucel, a 19-year-old student from Eindhoven.

Many Muslim women accuse the Somali-born politician of mixing culture with religion when tackling violence against women.

"I was restricted by male macho culture, and my migrant background... but you cannot use Islam as an excuse," said Famile Arslan, a 35-year-old family lawyer whose parents from eastern Turkey were illiterate.

"I have a very positive experience of Islam."

Yucel agreed that Hirsi ascribes problems to Islam which have other, more complex roots.

"Islam is interpreted by people and in Turkey the interpretation is very different from Somalia," she said.

"Culture and religion got mixed up with Hirsi Ali," added Yucel, who with other young Muslims run a website called "We are staying here" (www.wijblijvenhier.nl).

"Her statements on Islam were very harsh," she said.

"I have a completely different experience of Islam... as I come from a Turkish cultural background."

Hirsi claimed she had fled an arranged marriage and abusive family who had her circumcised as a child.

Muslim women accused the former MP of alienating precisely those she aimed to engage as relations between Muslims and non-Muslims deteriorated as never before.

"Let her call one woman forward and show how she really helped her," said Arslan.

"We worked for 10, 15, 20 years to help emancipate Muslim women... and she stole the respect we should have had as grass- roots movements working for change."

"If she wanted to campaign against violence against women then she shouldn't have written the Qur'an text on the body, because that was offensive to many of the religious women she claimed she was trying to help."

"Submission" shows an actress whose naked body is covered with a thin veil appealing to God about the violence she believes she must endure in his name.

Other scenes show naked women cower with texts from the Noble Qur'an inscribed on their bodies.

Yucel said she and her cohorts are examining issues such as violence against women but, unlike Hirsi, with a view to diffusing tension.

She is optimistic for the long-term, and proud to be a Dutch-Muslim who is free to wear a headscarf in places she would not be able to in Turkey.

Hopes have been running high that the new centrist government with the country's first Muslim ministers might usher in a more supportive climate.