Eleven-year old Sassi is currently hiding at a shelter home located in a slum area of Pakistan's southern port city of Karachi. 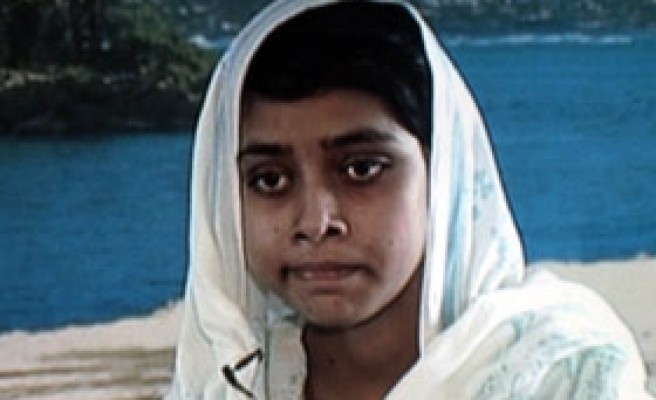 Eleven-year old Sassi is currently hiding at a shelter home located in a slum area of Pakistan's southern port city of Karachi.

She is not hiding from police, but from her own drug-addict father, who had sold her in the name of marriage to a 70-year old man when she was 9 in 2005.

"I had no idea what did marriage mean? I remember my mother was crying, and fighting with my father, who was forcing me to go with them (her husband and family)," Sassi told IslamOnline.net in the corridor of her shelter house.

"They beat up my mother who was trying to save me."

Hailing from a small town Thatta, located some 100 kilometers off southeast Karachi, Sassi had been recovered by the local police on the request of her mother who filed a petition in a court some 20 days after her daughter's forced marriage.

"They forcibly took me to their home in a nearby village," she recalled.

"As soon as I reached their home, one of their women gave me something to eat, which got me unconscious. When I woke up the next morning, my clothes were littered with blood."

Sassi said she was "molested" by her husband several times.

The police arrested her father and her husband, who were later released on bail following non-pursuance of case by her mother.

Pakistan President Pervez Musharraf said on Tuesday, December 5, his government was planning legislation to outlaw forced marriages, including a practice of marrying off women to settle disputes.

It is believed most such forced marriages, many occurring in relatively remote rural areas, go unreported.

Parents are often tempted to sell off young girls in exchange for the high price offered by grooms, often many times the age of their brides.

Bride prices commonly range from $1,000 to $5,000, with younger girls drawing a larger amount.

In Islam it is not permissible for the guardian to compel the one under his guardianship to marry someone she does not desire to marry.

Rather, it is necessary to seek her consent and permission.

Sassi said the days she spent with her husband were her worst nightmare.

"I didn't know what to do. I just wanted to either die or flee from there," she said with her eyes welled up with tears.

"But he used to keep a close eye on me. It seemed as if he knew about my wish."

Sassi was sent by her mother to a shelter home, run by an NGO providing shelter to homeless women, with the assistance of Thatta-based women organization.

"My mother sent me here because they (her husband and his family) had threatened to abduct me," she said.

"They said that I am the honor of their family, and they can't let their honor to go away."

Sassi is studying, working and residing in the shelter house.

Haider Rizvi, Chairman of the Department of Psychology, University of Karachi, warns of the extreme adverse physical and emotional impacts of such marriages.

"If a young girl gets married in her quite early age carries many health hazards like poor reproductive health due to increased pregnancies, therefore chances of death become double," he told IOL.

"The poor young poor girls cannot get proper education, cannot even get the opportunity to learn the domestic work/skills........especially when the expectations of in-laws are quite high then domestic problems are started......consequently end up with early divorce."

The expert also notes that with a big age difference, the chances of becoming a widow at a younger age is more likely.

"Psychological theories reveal that most of us develop a primary relationship with someone who is within three years of our own age. In our urban society, now the acceptance has been developed for young couples; on contrary in rural or slum areas the situation remains the same where the female is considered as a child producing machine or a sex-tool."

Rizvi maintains that it is high time for parents to think and revise their cultural and family norms.

"The early marriages for the girls should be discouraged at every level of the society."

"This is not the only case. I am also seeing the cases of three other girls, and one of them was married when she was only 6 years old," Saleha told IOL.

According to the law, she says, a girl cannot marry until she is 16, but like all other laws, the implementation of this law is weak.

Saleha thinks the specter of illiteracy is behind the early marriage phenomenon.

"A majority of people in the rural areas are unaware of the importance of an educated mother. Instead of providing education to their daughters, they want to get rid of them as soon as possible by marrying them to even men of their fathers' age," she said.

"There needs to be greater awareness on a wider level of the rights of women and also punishment for those who violate laws by selling their children. The impunity available to them has aggravated the situation," insisted the lawyer.

The Sindh and southern Punjab region is one of the most impoverished in the country, and research carried out into the issue indicates this is a key factor in the increase in such unlawful unions.

"They generally consider girls as burden, and illiteracy is a major reason for that. As soon as the girls turn 11-12, they think it is high time to get rid of this burden," she said.

"It's a perverted society in many ways. We have reports that such marriages are becoming increasingly common, and they will stop only if the law is applied."

Justice Majida, who was Pakistan's first woman high court judge, notes that the legality of early marriages in Pakistan is a complicated issue.

"Under Pakistani law, the Child Marriage Restraint Act of 1929 states no female under 16 or male less than 18 may marry. But under Hudood Ordinance, as soon as a girl reaches her puberty, she can marry," aid the chairwoman of Women Rights Commission.

"This complication needs to be sorted out because Pakistan is a warm country, and generally girls reach their puberty at 11 or 12 years here," Justice Majida said.

In 1990, Pakistan ratified the UN Convention on the Rights of Child, which prohibits child marriages.

In addition under the Muslim Family Law Ordinance, a girl must have attained the age of 16 and a boy must have turned 18, and both need to consent before the marriage can take place.

Hassamuddin Mansoori, a renowned religious scholar, says there is no age restriction for marriage in Islam.

"The 16-year age restriction is in the Pakistan panel code. It has nothing to do with Islamic law," he said.

"According to Islamic law, if a girl or boy has reached puberty, they can marry."

Mansoori said that marriage in Islam is regulated by certain rules, mainly that children must reach puberty and maturity to get married.

However, he said, the decision of marriage should be taken in line with the cultural, economic and social conditions of local society.

"There is no provision of forced marriages in Islam. This is totally unacceptable," Mansoori insisted.

He recalled that Prophet Muhammad (peace and blessings be upon him) asked for his daughter Fatima's consent before marrying her to imam Ali.

"A Woman has the right to accept or reject marriage proposals," Mansoori averred.

"Her consent is a prerequisite to the validity of the marital contract, according to the Prophet's teaching. It follows that if an "arranged marriage" means the marrying of a female without her consent, then such a marriage may be annulled if the female so wishes," he added.

"If a person classified as a child is married, when he or she reaches the age of puberty and maturity, then Islam gives him or her the right to choose whether to go on with that marriage or not", he maintained.

"It's not mandatory that the day you reach puberty, you have to get married. No, not at all. This is only permission that now you can marry. Otherwise, this decision should be taken in line with the circumstances being faced by every individual."

In 2002, the then Chief Justice Irshad Hassan declared the two notorious customs of Vani and Swara as un-Islamic and expressed concern over the rising number of these cases.

Vani and Swara customs are found in some parts of Punjab and NWFP respectively under which minor girls of a family are married to men, no matter how old they are, of the rival family to settle down enmities and disputes.

Recently, two girls were rescued by the intervention of the Chief Minister of Punjab.

"Although there are national laws such as the Marriage Restraint Act of 1929 and the Pakistan Penal Code that prohibit the sale and underage marriage of girls, these customary practices will be difficult to prevent unless laws are rigorously implemented and those breaching the contract are dealt with strictly under the law," said Justice Majida.