The leader of a group of East Timor rebels accused of trying to assassinate President Jose Ramos-Horta in February has surrendered to authorities, the country's deputy prime minister said on Tuesday. 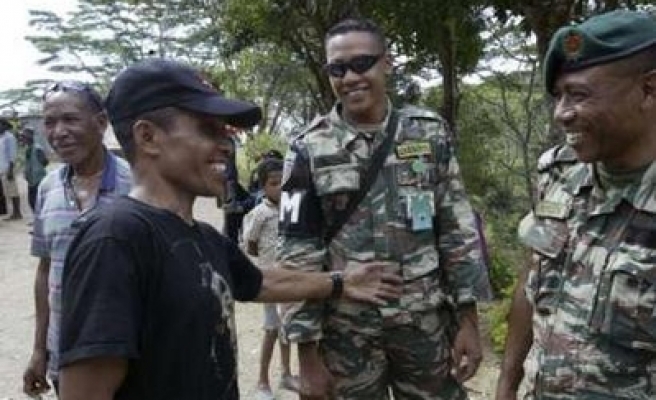 The surrender will raise hopes that Asia's youngest nation may now be able to find some stability since a hard-won independence from Indonesia in 2002.

Salsinha, who took command of the rebels after their leader, Alfredo Reinado, was killed in the Feb. 11 attack on President Jose Ramos-Horta, had been negotiating with authorities from a house in Ermera district, 75 km (47 miles) west of the capital.

His surrender was witnessed by Ramos-Horta, parliament speaker Fernando de Araujo and the head of the United Nations' mission in East Timor Atul Khare.

The men also surrendered weapons and other military equipment including camouflage uniforms and grenades.

East Timor had issued arrest warrants for Salsinha, a former army lieutenant, and 22 others over the Feb. 11 attacks, which also targeted Prime Minister Xanana Gusmao.

The army tore apart along regional lines in 2006, when about 600 soldiers were sacked, triggering factional violence that killed 37 people and drove 150,000 from their homes.

East Timor's parliament agreed last week to lift a state of emergency imposed following the attack on Ramos-Horta, although the state of alert was extended for another month in Ermera.

Ramos-Horta has returned to East Timor after more than two months of treatment in Australia. Gusmao escaped a separate raid unharmed.