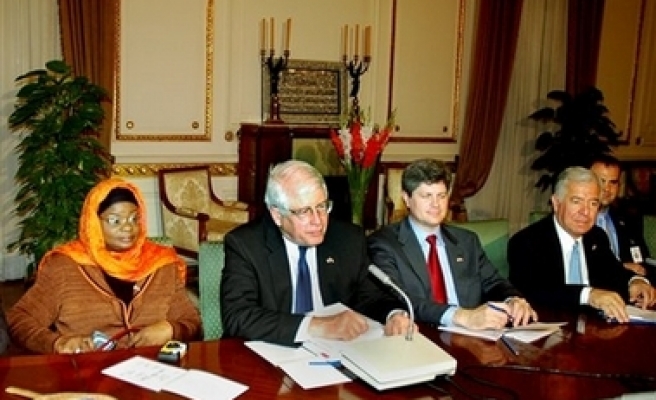 The bipartisan delegation headed by Rep. David Price, D-N.C., met with Egyptian President Hosni Mubarak early Sunday before heading to parliament to talk to a group of lawmakers that included the Brotherhood's Mohammed Saad el-Katatni.

"The United States says that it doesn't establish relations with the group, whether in Egypt or outside Egypt," said Mubarak's spokesman Suleiman Awaad. "The U.S. says it is meeting with the Brotherhood as Parliament members, but doesn't make the same distinction and refuses to talk with Hamas, who is heading the Palestinian government and is occupying the prime minister's seat."

El-Katatni said the talks focused on current challenges across the Middle East, not on Egypt.

"We met with the delegation for more than an hour and we discussed the American policy in the Middle East: Palestine, Iraq and Iran's nuclear issue," he said. "The talks didn't address internal Egyptian issues or political reform."

The delegation also included Reps. Jeff Fortenberry, R-Neb.; Nick Rahall, D-W.Va.; and Gwen Moore, D-Wis. The group is on a Middle East tour that will take them to Lebanon, Israel and the Palestine, Price told reporters.

Hoyer, a Democrat from Maryland, met with el-Katatni twice — once at Egypt's parliament and then at the home of the U.S. ambassador to Egypt.
Last Mod: 28 Mayıs 2007, 11:22
Add Comment