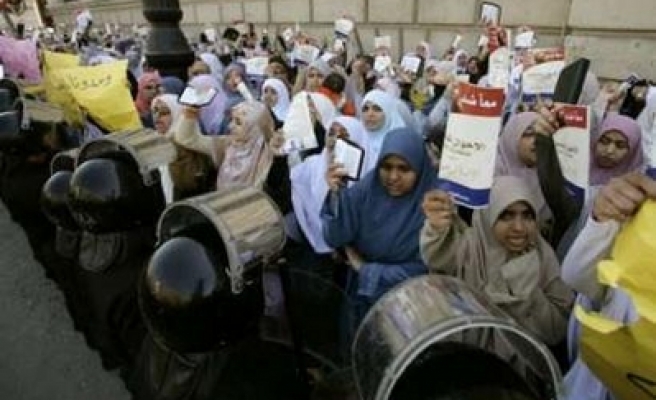 The men were detained in sweeps on Tuesday and Wednesday in the provinces of Beheira, Gharbia, Qalyoubia and Alexandria on suspicion of "resisting the authorities" after taking part in protests by several thousand Brotherhood members.

Prosecutors ordered 162 of the men to be held for 15 days on suspicion of membership in an illegal organisation and protesting without a permit. The Brotherhood's Web site said five of the men detained were candidates in the upcoming vote.

The remaining 85 were still being questioned, the security source said, while another 8 had been detained and released.

The state-run newspaper al-Akhbar said on Wednesday that Interior Minister Habib el-Adli had warned that "any attempt at trouble-making or incitement will be confronted decisively".

In the past few weeks, Egyptian courts have issued hundreds of rulings obliging the government to accept the candidacy of members of the Brotherhood, but the Brotherhood say authorities have ignored these rulings.

The courts then issued scores of rulings ordering a halt to the elections in a number of provinces because of the authorities' refusal to comply, but there is no indication those rulings will be implemented either.

Egyptian police have rounded up several hundred members of the group in recent weeks in the run-up to the council vote, including at least 148 would-be candidates.

U.S.-based Human Rights Watch has called the recent arrests a "shameless bid" to fix the elections, in which the Brotherhood is running against the ruling National Democratic Party.

The Brotherhood seeks an Islamic state through democratic means.

Seats on local councils could be important for the Brotherhood on a national level if it wants to field an independent candidate in a future presidential election.

Independent candidates for the presidency need endorsements from 140 members of local councils as well as support from members of both houses of parliament.

The government calls the Muslim Brotherhood a banned organisation but the group operates openly and holds a fifth of the seats in the lower house of parliament through members elected as independents.